Kyle Busch will chase a championship in 2012. 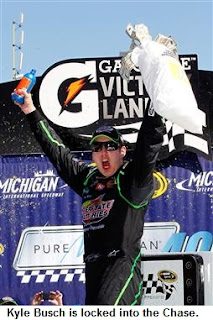 The Las Vegas native became the first driver to qualify for the 2012 Chase for the NASCAR Sprint Cup Sunday, with an impressive win in the Pure Michigan 400 at Michigan International Speedway. Busch chased down and passed leader Jimmie Johnson in the race’s late stages, then survived a green-white-checkered flag restart to claim his first career Michigan win, the fourth victory of his 2012 Sprint Cup season and a guaranteed place in the championship Chase.

The win was a statement-maker for Busch and his M&Ms Toyota team. They prevailed in a head-to-head clash with Johnson, claiming the victory laurels in a race that appeared to belong to the five-time and defending series champion. Johnson has traditionally begun to round into championship form at this time of year, but Busch’s show of late-race strength denied the Lowes Chevrolet driver an opportunity to claim his second victory of the season. It also sent a clear message that this may not be the same Kyle Busch who wilted at Chase time in each of the last two seasons.

Sunday's win also earned Busch a berth in the Sprint Summer Showdown and a shot at a $1-million bonus at the AdvoCare 500 Sept. 4 at Atlanta Motor Speedway. He joins Paul Menard, Brad Keselowski and Marcos Ambrose as drivers eligible for the payday, and said he is already thinking about claiming the bonus cash. “I hope we get a chance to run up front, win the thing and bring home some extra money for charity, for a fan and for all of us here at Joe Gibbs Racing,” said Busch. Drivers have one more opportunity to qualify for the Sprint Summer Showdown by winning this weekend’s race at Bristol Motor Speedway.

While Busch thrived at Michigan, Joe Gibbs Racing teammate Denny Hamlin saw his 2012 Chase hopes dealt a serious – and potentially fatal – blow. Hamlin’s Fed-Ex Toyota slapped the Turn Two wall midway in Sunday’s race, then spent 15 laps in the garage repairing damage en route to a 35th-place finish. With just one Top-10 finish in his last eight races, he has now plummeted to 14th place in Sprint Cup points. He still holds the final Wildcard entry to the 2012 Chase, but his grip on that spot is tenuous at best, and there are serious doubts whether he and crew chief Mike Forde have what it takes to contend for the title, even if they do manage to make the Chase.

“When things don’t go right, it’s hard not to press the panic button,” admitted Hamlin Sunday. “I think I’ve done a good job of not doing that in my career, (but) the last five weeks, I can’t necessarily say that’s the case.” 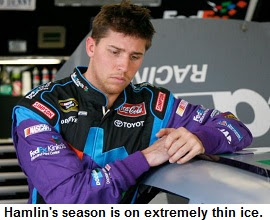 Hamlin said he may have pressed too hard at Michigan, trying to push a mediocre car to the front of the pack. “You want to salvage a good day. Sure, I could have finished 15th or 20th or whatever, but I was trying to push. I’m not going to settle for finishing 15th or 20th. I want to go out there and win, and I’m going to push as hard as I can do that. If I step over the edge, that’s what I did today. It happens.”

Asked about his decision to utilize Toyota Racing Development horsepower (rather than a Joe Gibbs Racing engine) for the first time at Michigan, Hamlin called the move, “a big favor to ask (of) a manufacturer. It's a lot of manpower (and) a lot of work had to be done within JGR… to get this engine imported into our car. I was behind it 100 percent,” he said. “Ultimately what matters is results. If we are going to make the Chase, we cannot afford DNFs because of engine failures. On top of that, we can’t afford to keep starting in the back every week because of engine failures. That's just too hard to overcome.”