Patrick Will Announce Tomorrow, Instead

OK, we'll do it tomorrow. 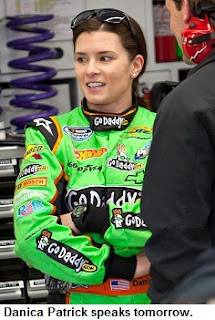 The much-anticipated news conference concerning Danica Patrick's future plans will take place tomorrow (Thursday) at noon ET. The announcement was originally expected to take place today, but was postponed after sources said logistics could not be worked out to bring all the involved parties together.

Patrick and GoDaddy.com CEO and founder Bob Parsons will now announce their plans at noon tomorrow at GoDaddy's Phoenix, AZ, headquarters, confirming that Patrick will compete full-time in the Nationwide Series for JR Motorsports, in addition to as many as nine NASCAR Sprint Cup Series starts for Stewart Haas Racing.

In 20 Nationwide starts to date, Patrick has an average finish of 23.8, with one Top-5 and three Top-10 finishes. She will leave the Andretti Autosport IZOD IndyCar Series team to jump to NASCAR. Patrick's announcment will air live on SiriusXM NASCAR Radio Channel 90 at 12 PM ET.