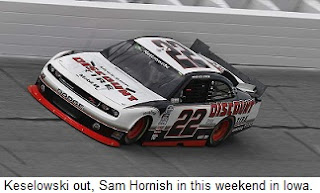 Penske Racing announced his withdrawal from the event today, after Keselowski rode out a hard crash while testing his Sprint Cup Series Dodge yesterday at Road Atlanta. He suffered contusions and abrasions in the crash, and and was airlifted to an Atlanta Hospital for evaluation before being treated and released.

Parker Kligerman will practice Penske's #22 Discount Tire Dodge Challenger Friday, with Sam Hornish Jr. slated to qualify and race the car on Saturday. A statement from Penske Racing said the team will continue to evaluate Keselowski's condition, but he is expected t take part in Sunday's Sprint Cup Series event at Pocono Raceway.
Posted by Dave Moody at 11:36 AM