The next time some pampered, turf-toe nursing NFL loudmouth pops off about NASCAR drivers not being “real athletes,” tell them the story of Brad Keselowski at Pocono Raceway. 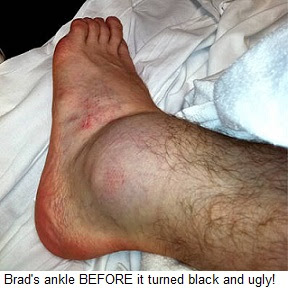 Just four days after suffering an avulsion fracture of his left ankle, multiple contusions and abrasions in a savage testing crash at the Road Atlanta road course, Keselowski strapped into his Miller Lite Dodge and gave new meaning to the term “gut check.” Shifting and braking with a broken and horribly swollen left ankle, he wrestled the lead away from Kyle Busch with just 15 laps remaining, then withstood a final, determined challenge from the Joe Gibbs Racing driver to win the “Good Sam RV Insurance 500” at Pocono. The win came after a doctor drained blood from the Michigan native’s battered leg during a lengthy mid-race rain delay.

“I wasn’t getting out of the car,” said Keselowski afterward. “This was an `earn-it’ weekend. Nobody gave us anything. I’ve always wanted to win a Cup race and earn it. Not with fuel mileage, not (drafting) at Talladega, (but) a real win. And today feels like that.”

Keselowski refused to dwell on the pain of his 500-mile ironman grind, saying, “I came here to win. When you let pain get into your head so far that you don't believe you can win anymore, you'll never win. As far as a pain scale, I don’t know. I’m not real good at pain scales. I just know it hurt.”

His ability to play through pain Sunday left heads shaking throughout the Sprint Cup Series garage. “It’s amazing what the body can do,” said teammate Kurt Busch after finishing third. “For him to go through that wreck, get back on his horse right away and find success, that’s only going to make Brad Keselowski a better racer.”

The win catapulted Keselowski to 18th in championship points and back to the top of an ever-changing Sprint Cup Series wildcard picture. While conceding that his Pocono triumph was “probably really good for our Chase hopes,” he steadfastly refused to call the job complete. “(It) gives us pretty high odds if we were playing poker,” he said, “but nothing is 100 percent until it's 100 percent. Lots of races left. Keep plugging away. If we keep running like this, maybe we can get a third win and be damn near immune.”

In Victory Lane, the third-generation racer did his best to duck the spotlight, speaking at length about the 31 U.S. Navy SEALs killed Saturday when their helicopter was shot down by Taliban forces in Afghanistan. “I have a cousin in the Navy SEALs,” he said, after carrying an oversized American flag during his post-race victory burnout. “One of the guys who died over there was someone he was friends with. He told me a little bit about this week and it kind of put things in perspective.

“I might not be feeling great, but those are the guys that are really making sacrifices. We're just driving race cars for a living. It was inspirational for me. Whenever I felt like ‘This hurts, I don't want to do this, I want to get out,’ they gave me inspiration on what it means to man up and make it happen. It's really not that bad.” 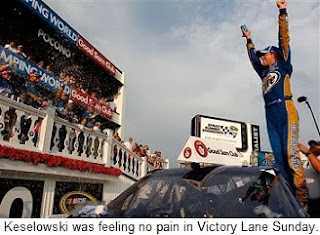 Keselowski now has a few precious days to heal before hobbling off to Watkins Glen International for a race even tougher on his battered left ankle than Sunday’s Pocono outing. Most drivers would run a few tentative laps to qualify for championship points before turning over the wheel to a road course ringer, but Brad Keselowski is not “most drivers.”

He’s a tough SOB from a family of tough SOBs; the son of 25-time ARCA and Camping World Truck Series driver Bob Keselowski, a man who threatened a year ago – at age 60 – to “get my own damn uniform back out” and settle a series of on-track disputes between his son and rival Carl Edwards.

Keselowski is a racer in the truest sense of the word, and in the grand and glorious family tradition, he will grit his teeth again Sunday and drive his Miller Lite Dodge, all the way to the checkered flag.