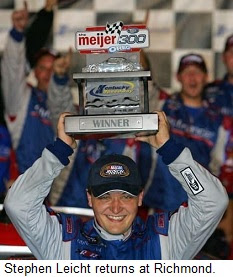 Stephen Leicht will join Tommy Baldwin Racing for the upcoming NASCAR Sprint Cup Series race at Richmond International Raceway September 10th. As an extension of Pepsi Max’s promotion with Golden Corral and TBR, Pepsi Max will adorn the hood of the No. 35 Pepsi Max Chevrolet piloted by Leicht.

Leicht made his NASCAR debut in 2005 in the NASCAR Nationwide Series, ultimately making 71 starts in the series for Yates Racing and Richard Childress Racing. The Asheville, N.C., native scored his only Nationwide win in 2007 at Kentucky Speedway while driving for Yates Racing. That same year, he finished seventh in the Nationwide point standings. In his 71 series starts, Leicht collected three top-five and 16 top-10 finishes. The 24-year-old also made a start in the Sprint Cup Series at Pocono Raceway with Yates Racing, qualifying 36th and finishing 33rd.

"I’ve always watched Stephen’s career," said Baldwin. “He did really well when we tested a Cup car together, and I was impressed. This opportunity came up, and we needed to fill the seat. I thought it was the perfect opportunity to give Stephen a shot at racing in the Cup series.”

“I’m very excited to be working with Tommy Baldwin Racing,” said Leicht. “I’ve known Tommy since back when I raced with Robert Yates Racing in 2007, and I’m really looking forward to this opportunity to compete in the Cup series.”

Leicht will test a TBR Chevrolet Wednesday at Gresham Motorsports Park, in preparation for his return at Richmond.