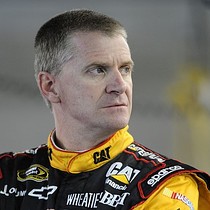 NASCAR announced yesterday that it is considering mandatory baseline impact testing for drivers in 2014, in an effort to more accurately diagnose head injuries. Asked about the proposed new program, veteran driver Jeff Burton said he is in favor of the move, while still harboring concerns.


“I haven’t done it yet,” said Burton of the baseline test. “I’m investigating it and getting all the information that I feel like I need to get. I’m trying to get educated on it.
“I think it is a good idea,” he said, “the fundamentals of it are a good idea. (But) I want to know the specifics of it. I want to know all the facts before I commit to doing it.”
Burton said he is concerned that a poor post-crash test could result in a driver being unnecessarily removed from the cockpit for a subsequent race.
“I think the interpretation of the results is everybody’s concern,” said the Caterpillar Chevrolet driver. “Nobody wants to drive in a condition they shouldn’t drive in, but we all feel like we are our own best judge to determine if we should drive or not. I don’t want to speak for anybody else, but I think (the interpretation of results) is the biggest concern.
“I don’t think anybody wants to drive in a condition that puts somebody else in danger, or puts themselves in larger danger. That part of it is good. But how they implement it; how it is judged; how it is scored – all those things – are to me, specifics that I want to understand.”
“I don’t have a belief that NASCAR wants to sit a driver down just for the fun of it,” he said. “I don’t think they would do something, except in the incident (where) there is no other choice. But then again, it is a mechanism that could be used to make a decision.
“I’m not opposed to doing it. I just want to understand how it all works before I commit to doing it.”