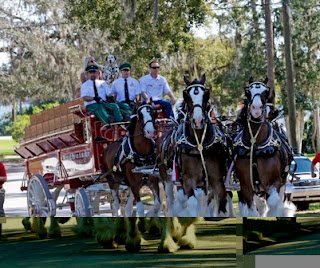 Anheuser-Busch called upon its world-renowned Budweiser Clydesdales to deliver a special package to military veterans Jayson and Justin Ryter Wednesday in Ormond Beach, Fla. Their delivery man, NASCAR driver Kevin Harvick – who’s no stranger to horsepower – was fit for the job, as the Marines received tickets to Sunday’s Daytona 500.


The Budweiser Clydesdales have been an enduring symbol of Anheuser-Busch’s heritage, tradition and commitment to quality since 1933, when August A. Busch Jr. and Adolphus Busch III surprised their father, August A. Busch Sr., with the gift of a six-horse Clydesdale hitch to commemorate the repeal of Prohibition. The hitch now consists of eight majestic horses, the famous red, white and gold beer wagon, and two drivers seated next to the hitch’s signature mascot Dalmatian.
On Wednesday, however, the hitch had two additional passengers – Harvick and his wife DeLana – who presented the brothers with several cases of Budweiser in addition to the Daytona 500 tickets.
“Anytime you get an opportunity to show your appreciation for our men and women in the military it’s great to be a part of,” said Harvick, winner of the 2007 Daytona 500. “This is obviously just one of the many things that Budweiser does for our military personnel. The Clydesdales add a whole new element to it. People love to see the hitch and the Clydesdales. To be able to ride on the hitch and come up the city streets and see all the people on the side of the roads is exciting.” 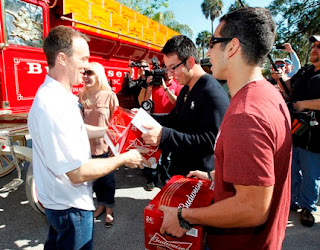 Jayson and Justin, 22-year-old fraternal twins, recently returned home after four years of active duty in the United States Marine Corps. Both siblings enlisted shortly after graduating from Seabreeze High School in 2008. Jayson served in various missions as a Military Transport Operator (MTO), including several months in Afghanistan, while Justin was permanently stationed in Hawaii in Personnel Administration .
The twins were discharged from active duty within six months of each other– Jayson in August of last year and Justin only a few weeks ago in January - and returned home to Ormond Beach to pursue a college degree. They currently are enrolled at Daytona State College.
“I’m blown away,” Justin said. “I’m just speechless. This is probably the most exciting thing that’s happened here in a while. I can’t wait to get to the track on Sunday and watch Kevin race.”
“I’ve always seen (the Clydesdales) on commercials and thought about how I would love to see them in person someday,” Jayson said. “Here I am seeing them and I’m just surprised they’re actually in front of my house.”
Posted by Dave Moody at 9:20 PM