Martin Wants Another Crack At "World Center Of Pain" 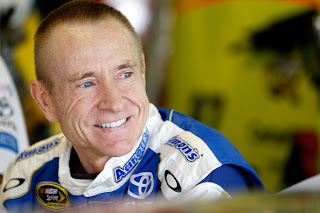 
The Batesville, Arkansas native will drive Michael Waltrip Racing’s No. 55 Aaron’s Dream Machine Toyota in 24 points races and two non-points races this season, before stepping down to make way for a full-time driver in 2014. While Martin has yet to determine his 2014 plans, he insists that the word “retirement” is still not a part of his vocabulary.
“All I can say at the moment is that I don’t expect to be in the No. 55 as the driver,” he said. “My goal is to see MWR, (crew chief) Rodney Childers and the No. 55 car race for a championship. That team is too good to not race for a championship. They nearly won races with all three drivers last year – myself, Michael Waltrip and Brian Vickers – and my goal for this season is to help them improve their position in the Cup garage and be a sought-after ride.
“If I was younger, that is certainly where I would want to be.
“Without question, (another season like 2012) would solidify them,” he said. “This year will judge whether they take their position up there with the very top teams in the sport. If we’re able to come back and do what we were able to do last year -- or even more -- I think we’ll be viewed like Roush and Hendrick; the very top teams.”
While not mathematically eligible for either the Chase of the NASCAR Sprint Cup Series championship, Martin said his goals have not changed.
“When I first started racing, it was all about the race,” he said. “The race was what people got excited about. You accumulated points throughout the season, and that is certainly another measure of your success, but the racing is really what it’s all about. It’s real, and it’s now. You can see it, touch it, and it’s really what matters to me.”
While not superstitious, Martin said he cannot help but notice that this is the 55th running of the “Great American Race;” a number that coincides with the one on the doors of his Toyota Camry.
“This is the 55th Daytona 500, and the No. 55 is a pretty cool number,” he said. “Winning the Daytona 500 would definitely be the crown jewel of my career. This place has been a thorn in my side over the years. Instead of being the `World Center of Racing,’ for me this place has been the `World Center of Pain.’ It has been one of my toughest tracks, and I have been in contention to win fewer times here than anywhere on the circuit. We stumbled around and won a Bud Shootout here a few years ago, and we stumbled around and won an IROC race once, but in all the races I’ve run, that’s about it.
“I’ve been close a few times, but not enough times to actually pull one off.”
Martin said he is a big believer in fate, and that if a Daytona 500 win is meant to be, “then it’s meant to be.
"Sometimes when you win, it’s easy," he said. "Other times, you can’t win, no matter what. I watched Dale Earnhardt win 44 races here at Daytona without ever winning the Daytona 500. He finally got it done, but 44 races is a long time without winning the big one. He won Nationwide races, Bud Shootouts, 125-mile qualifiers, July races… he won everything there was to win for so many years, but the Daytona 500 was just not meant to be, until it was meant to be.
“I don’t believe in tampering with fate,” said Martin. “I’m not greedy. I’m thankful for the races I did get to win, and not bitter at all about the ones I didn’t. Just to be driving a car capable of winning the race at this stage of my career is pretty incredible, and I’m thankful to Michael and everyone at MWR for the opportunity.”
Posted by Dave Moody at 10:17 AM