Stewart Says Losing Daytona "Feels Like You Got Mule Kicked" 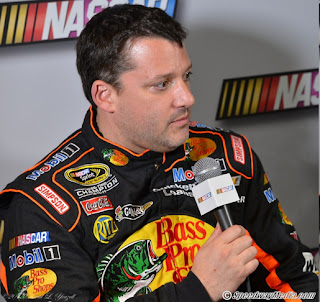 With an IndyCar Series championship and three NASCAR Sprint Cup Series titles, Tony Stewart has no shortage of hardware gathering dust on his mantle.


One trophy that has evaded him, however, is the Harley Earl Trophy, emblematic of victory in the Daytona 500. Still seeking his first win in the “Great American Race,” Stewart said yesterday that winning NASCAR’s most prestigious event ranks near the top of his to-do list.
“You can look at guys like Rusty Wallace and Mark Martin that have never won it (and) say, `Well, it's okay because (they never won it either).’ If it doesn't happen, you have to wait 365 days to try it again. That's the reality of it. That's what makes the plane ride home suck. There's nothing you can do about it. You can go win a race the next week somewhere else, but it's not the Daytona 500. Once the first race of the year is over, you’ve either accomplished the goal or you’ve got to wait a whole year to do it again.
“It feels like you got mule kicked, and there’s nothing you can do about it for a year. Just sit there and think about what you did wrong, what you could have done different. It's a miserable feeling, (knowing) that you have to wait a whole calendar year to get that opportunity again.”
Stewart said Sunday’s 500 will likely be part science project and part casino gambling.
“You do everything in your power to take care of the science or technology side, and do everything you can to build the fastest car,” he said. “Then, if you don't have the luck to go with it -- if you're in the wrong spot at the wrong time at the end -- it can take you out of the opportunity.
“Everything has to go right,” he said. “The Indy 500 is the same way. It's easy to compare those two, because everything has to go right that whole day. You don't normally get the opportunity to have a mistake and come back from it. You look at the guys that normally have that trophy at the end of the day, they're guys that had no drama at all during their race. It's one that you just can't afford to make a mistake.
Stewart said the design of the new, Gen-6 race car could make for a more aggressive race.
“You're able to be a lot more aggressive with it,” he said. “I'm not sure you have to have as much finesse. It's going to give more drivers an opportunity to run a lot better, because it's got a lot of downforce and a lot of side force. It will definitely catch mistakes that they make.
Stewart said that while new car should also discourage bump drafting, he expects someone to roll the dice and attempt to bump-draft their way to victory in the final laps.
“If you push a guy, it picks him up and wrecks him,” he said. “(That) doesn't make guys want to do it much, if that's the end result. (But) somebody's bound to try it again. Just because it didn't work the first time doesn't mean somebody else isn't going to try it.
“We’ve got to go out and see what's going on,” he said. “You’ve got to see how the car is going to react; how it sucks up and how (to push) a guy without physically touching the bumper. We've always talked about air being like a spring between the cars, and that's still in play.
“You're still going to have to go out there and physically figure out… what you can and can't get away with.”
Photo: David Yeazell/SpeedwayMedia.com