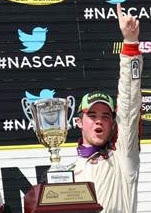 
“I am excited for the opportunity to race with TriStar Motorsports in the Nationwide Series,” said Hackenbracht. “I have not run any NASCAR events and I'm excited to make my debut in the Nationwide Series with an established team. My expectations are to finish every race I run this year, qualify in the top-20 and pull off top-15 finishes. The Nationwide Series is going to be very competitive this year but I'm ready for the challenge with the help of a few veterans both in the series and at TriStar Motorsports to help my learning curve at tracks I have never been on.”
A veteran of quarter midgets and Legends cars, Hackenbracht will continue his climb up the racing ranks by joining TriStar Motorsports. The 21-year-old driver is expected to compete in a minimum of five NASCAR Nationwide Series events for the team. His schedule will be released at a later date.
“We are really looking forward to having Chad join our team,” said Team Owner, Mark Smith. “He has already shown that he has a lot of talent behind the wheel of a stock car. We are excited to help him develop his skills and give him his first opportunity to race in NASCAR. He will have some veteran guidance in his new teammates, which should help him as he takes the next step in his racing career.”
Hackenbracht, who has competed in the ARCA Racing Series full-time the past two years, has 47 career starts in that series with eight top-five and 22 top-10 finishes - including a win at Pocono Raceway last year.
Hackenbracht’s lifelong focus on racing has led to 35 career quarter midget wins across six divisions and the 2008 Legends National Semi Pro Championship with 17 wins at nine tracks in four different states. Hackenbracht, who has typically competed in cars fielded by his family owned team, has 76 top-10 finishes in 98 Legends Cars starts in 2007 and 2008.
Posted by Dave Moody at 2:01 PM