McMurray On Daytona: "We're Going To Have A Wreck" 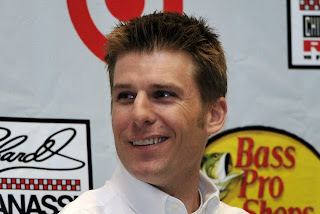 Jamie McMurray knows what it’s like to win the Daytona 500, having hoisted the prestigious Harley J. Earl Trophy in 2010. After two discouraging seasons since then, the Joplin, MO, native said he is anxious to contend again in 2013.


“It’s definitely the most amazing race you can win,” said McMurray. “There’s not any other race that compares to the Daytona 500, because we’re here for so many days and there’s so much buildup to it. As a little kid, this is the race that everybody watched. Even if you are a casual NASCAR fan, you watch the Daytona 500. I’ve watched this since I was little. It’s the most amazing racing moment you can have.”
McMurray said his Earnhardt-Ganassi Racing team has made improvements during the off season, while admitting that the transition to the new, Gen-6 racer makes progress difficult to gauge.
“We cut up all those cars (from last year) and have brand new cars,” he said. “The things that made those cars tick, I don’t think will make these cars tick. It’s going to be different. In relation to the other competitors, we’ve been faster this year than we were last year. That’s all you can really base it on, because you don’t know what other guys have. But our speed has been better in testing compared to last year for sure.”
He said preseason testing has been less about speed and more about learning the new cars.
“It wasn’t really about what you do at a race,” said McMurray. “It was really just about seeing how different pieces, different bump styles (affect the car). Certainly, you want to make the car as fast as you can, but we didn’t have any data on the cars, so it’s so nice to get to test and have data to back it up to go back to the seven-post and see if you can make your simulation program, your seven-post and the actual track data all relate.”
McMurray said he is anxious to see what his fellow drivers think of the car, and what drafting techniques are being utilized on the race track.
“I’m anxious to get on the internet in the morning and see what other drivers have (said) about what they expect. My gut tells me this is a survival race. I think we are going to have wrecks. Based on how the cars drove at the test -- how hard the cars were to drive in a large pack -- I think when we get a large pack together, we’re going to have a wreck.
“I’m curious to see what happens in the (Sprint Unlimited) and in the 150s. I think until we get 43 cars on the track, it’s not going to be the same. To me, the key to the 500 will be survival. The last 10 laps are really a crap shoot. You go out and you drive your hardest, try to make the smartest decisions and hope the other people around you will make decisions that benefit you, as well.”
“It seems like some guys are better at it than others,” said McMurray. “But there is (also) a large amount of luck involved in this. I believe the guys that tell you (there isn’t) are just full of themselves.”
McMurray said he does not expect to see any two-car tandem drafting, but admitted he won’t know for sure until later in the week.
“The Shootout is going to tell us that,” he said. “When we get to the last lap of (the Sprint Unlimited), it seems like it always ends under caution or a green-white-checker. So we’ll just have to wait and see what happens.”
“The last few years down here, you could do tandem (drafting) because when you’re pushing the guy, the car was very stable, with a lot of grip. When we were down here for the test, the cars seemed light in the back. We’ve got such a small spoiler (that) cars skate around a lot, and you didn’t want the guy shoving you that much. I think the noses are shaped a little bit different. We might get more comfortable with that, but I didn’t see anyone tandem while we were down here.
“You can only go about half a lap anyway,” he warned. “It’s a counter-productive move.”
McMurray gave the aesthetics of the new car high marks, saying, “I thought the Generation 5 car was the ugliest car of all time. I thought it was horrible. I think this is the best looking car we’ve ever been in. I’ve been so anxious and excited to see the pictures of the different paint schemes that are coming out this year, and every paint scheme -- even if it’s the same one from last year -- looks better. I think it’s cool that we have some brand identity.
“If you’re a Chevy fan, you have something to pull for. They are actually different now which is cool.”
Posted by Dave Moody at 12:12 PM