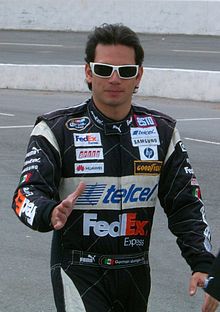 
NET10 Wireless will serve as primary sponsor for 12 Truck Series races this year and will continue as an associate sponsor for the remaining 10 races. Additional partners for the No. 77 Toyota Tundra will be announced at a future date.
"I am very happy to join Red Horse Racing," said Quiroga, a Mexico City native. "I looked around the RHR shop back in December and was very pleased with the entire organization and how well they support each other. Having NET10 Wireless as a sponsor and Dan Stillman as our crew chief, we look forward to fighting and competing for wins."
Stillman has been atop the pit box for more than 10 years having earned five Nationwide Series victories, finishing second in the points standings in 2009 and capturing seven pole awards.
"This is a crucial year in Germán's career as he competes for Rookie of the Year honors," said Stillman. "Being a part of Red Horse Racing has given both Germán and me the best chances of getting the feat done with the right equipment and resources with Toyota and Joe Gibbs Engines."
Red Horse Racing has fielded trucks since 2005 and Principal, Tom DeLoach enjoys supporting new talent in the series.
"Germán is such a distinctive race car driver," DeLoach adds." We are anxious to see what this year will bring him. He knows what it takes to win championships and we are thrilled to be able to provide him with the equipment to be competitive. The Rookie of the Year competition will be tough this year, but we are ready for the battle."
2013 marks the second year of NET10 Wireless' involvement with the NASCAR Camping World truck series, having sponsored Quiroga for four races during the 2012 season.
Posted by Dave Moody at 12:05 PM