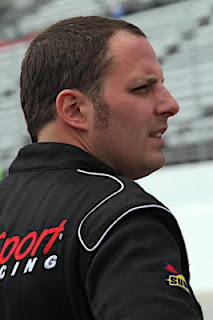 ThorSport Racing driver Johnny Sauter has had plenty of success at Daytona International Speedway over the years. None of it, however, has come in the NASCAR Camping World Truck Series.


The Wisconsin native hopes to reverse his fortune with a strong run at the “World Center of Racing” in Friday night’s season opening “NextEra Energy Resources 250.”


"Given my recent history, it's hard not to think about crashing when I think about Daytona," laughed Sauter. "I've come close to winning in both the Nationwide and Truck Series, but for some reason, finishing Truck races has been kind of been a tough row to hoe.
"I've raced Daytona enough to know that luck has a huge presence,” he said. “Either you're on the right or wrong side of that when it comes to getting crashed. I have run up front and gotten wrecked at the end, and I’ve hidden in the back and had the same result. No matter what you do, Daytona can reach out and bite you.
“If you're watching (the race), pick your bathroom breaks very carefully. It could happen on Lap 1 or on the last lap; I've had it happen both ways in a three-year period."
Sauter started in the Top-10 in each of his first three Daytona attempts, but was wrecked on the opening lap in 2010. He was leading last year when eventual winner John King turned him around coming to the white flag in a race that featured four caution periods in the last 10 laps.
"Eighty percent of what happens at Daytona is out of your control,” said Sauter. “Either you're lucky or you're not. I can give you millions of examples; last year James Buescher went into Turn Four on the last lap in 11th place, then drove through a big wreck and won the Nationwide race.
“It's a big game of luck, and no matter how bad the past is, you've just got to block it out. This is a new season and we're starting from scratch -- everybody is -- so everybody's expectations are high. But (crew chief) Joe Shear Jr. and I know we've got what it takes to contend for this championship and a win at Daytona."
Sauter will debut ThorSport's newly numbered No. 98 Carolina Nut Co./Curb Records Toyota Tundra in the 14th annual Daytona opener, and said support from teammates Matt Crafton (in the No. 88 Slim Jim/Menards Toyota) and Todd Bodine (No. 13 Mattei Air Compressors Toyota) could help him reverse his run of tough Daytona luck.


"We’ll be trying to get a ThorSport truck into Victory Lane," said Sauter. "You can't deny Todd's history, with all his superspeedway wins, and Crafton and I always seem to run well. Hopefully, we can all get hooked-up together and have a good run. Hopefully, somebody can pull off the win for ThorSport."
Posted by Dave Moody at 9:02 PM