Dillon: Running For NNS Title "Is Going To Be Tough" 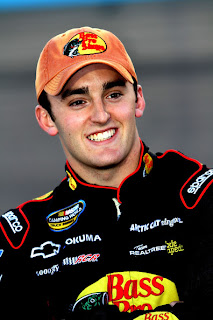 Despite having a year of NASCAR Nationwide Series experience in the rearview mirror, Austin Dillon said today that contending for the 2013 series title will be more difficult than it was a season ago.


“Running for a championship this year is going to be tough,” admitted the Richard Childress Racing driver. “We have guys that are coming down from the Cup series that are going to be tough. There are (Nationwide) guys that are going to want to prove themselves, and I have seen have guys make big mistakes trying to make that move. Instead of trying to take a Top-5, you are taking more than what the car can give you at that time. You will see some of that this year. I’m sure. You are going to have to watch who you are around and be smart about the people you race.”
Asked about his limited schedule of Sprint Cup Series races this season, Dillon said he is setting modest, attainable goals.
“The biggest thing is to gain experience and (be) ready for 2014. The great thing that the Nationwide Series is going to give me this year is the competition level is going to be awesome. There is a lot of sheer speed out there. That competition level is going to help me going into 2014.
“We just want to go out there, gain experience and try and lineup with these guys and make sure we are confident for the next year.”
Dillon said he believes many of RCR’s competitive issues from 2013 have been solved, adding that the organization has “made the right steps as a company to come back this year and work together more. I think that was one of the big things. Our Nationwide shop did a great job of making sure we were all on the same program when we got to the track. Our drivers worked well last year together. I think this year the Cup drivers are going to be better together also.
“We have to make it more like what we had at the Nationwide shop, where we worked really well together in practice,” he said. “If a car was faster, we switched to that setup. It’s not an ego thing. It’s more that you take what is faster and go with it. In today’s world, you have to have good teammates that push you and use their setups. We will see how it goes this year.”
Dillon also hailed the hiring of Competition Director Eric Warren, saying he has “been working really hard in the off season to make sure that the cars are very similar and working together well,” saying that particular change can be more difficult than it seems.
“It’s pretty tough,” he admitted. “You’ve got to have guys that are willing to change. You can’t change it on your own. They’ve got to buy into the program. I think it is going to be an interesting to see how we do when we get to these oval tracks. I know these cars have been faster. Our RCR cars have been faster at the tests and I’m looking forward to getting out in one.”
Dillon said his main challenge will be the jump in competition between Nationwide and Sprint Cup.
“The competition level is obviously the best in NASCAR,” he said. “You don’t have (quality) from first to 15th, you have it from first… all the way back to 30th. You’ve got guys that are running within three to four tenths. You can’t miss a line, you can’t mess up, and you’ve just got to be very consistent.
“That is why you see a guy like Jimmie Johnson who has done so well. He is mentally a very tough guy who stays up front and just wears you down. I think the Cup series is a grueling 36 races that you really have to be prepared for when you go into it.”
He also said he looks forward to bringing RCR’s legendary No. 3 back to the Sprint Cup Series for the first time since Dale Earnhardt’s death on the final lap of the 2001 Daytona 500. “I enjoy running the number,” he said. “It’s very special to me and my family. Not only that, it’s just a fun number to have running out there. All I can guarantee is 110 percent (on) my part.”
Posted by Dave Moody at 2:01 PM