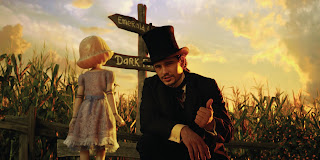 James Franco, star of the Disney adventure “Oz The Great and Powerful,” which is scheduled for release on March 8, will serve as Grand Marshal for the 55th running of the Daytona 500 NASCAR Sprint Cup Series race on Sunday, Feb. 24 at Daytona International Speedway.


Franco will give the “Drivers start your engines” command in “The Great American Race.” He’ll also be introduced at the driver’s meeting, participate in pre-race ceremonies and ride in one of the Grand Marshal cars during the pace laps prior to the green flag of the 200-lap, 500-mile race.
“We’re excited to welcome James Franco and have him take part in the pre-race festivities for the Daytona 500,” Daytona International Speedway President Joie Chitwood III said. “In front of thousands of race fans, we’re looking forward to hearing James’ enthusiastic starting command to kick off the Daytona 500 and the new NASCAR Sprint Cup Series season.”
“Oz The Great and Powerful,” directed by Sam Raimi, imagines the origins of L. Frank Baum’s beloved wizard character. When Oscar Diggs (Franco), a small-time circus magician with dubious ethics, is hurled away from dusty Kansas to the vibrant Land of Oz, he thinks he’s hit the jackpot—fame and fortune are his for the taking—that is until he meets three witches, Theodora (Mila Kunis), Evanora (Rachel Weisz) and Glinda (Michelle Williams), who are not convinced he is the great wizard everyone’s been expecting.
Reluctantly drawn into the epic problems facing the Land of Oz and its inhabitants, Oscar must find out who is good and who is evil before it is too late. Putting his magical arts to use through illusion, ingenuity—and even a bit of wizardry—Oscar transforms himself not only into the great wizard but into a better man as well.
Franco will next be seen in Harmony Korine’s “Spring Breakers.” His credits include “127 Hours,” in which he received a Best Actor Oscar® nomination, “ the “Spider-Man” trilogy, “Milk,” “Pineapple Express” and most recently “Rise of the Planet of the Apes.”
Franco joins the prestigious list of previous Daytona 500 Grand Marshals including John Travolta, Ben Affleck, Nicolas Cage, Kate Upton, Jane Lynch and Matthew McConaughey.
Tickets for the 55th Daytona 500 on Sunday, Feb. 24, as well as all Budweiser Speedweeks At Daytona events, are available online at www.daytonainternationalspeedway.com or by calling 1-800-PITSHOP.
Posted by Dave Moody at 9:57 AM