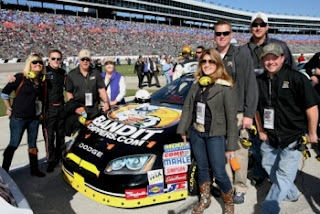 
The sponsorship will put Bandit’s logo on the quarterpanels of Kligerman’s Toyota at several of NASCAR's most famous tracks through the first half of 2013, beginning with the Nationwide Series season opener at Daytona International Speedway. Bandit will serve as primary sponsor for Kligerman in two races, including the the DRIVE4COPD 300 on February 23 at Daytona. Bandit will be a co-primary sponsor for three races and an associate sponsor for two races.
The current race schedule will have Kligerman driving the Bandit Industries car at Bristol on March 16, Texas on April 12, Talladega on May 4, Michigan on June 15, Kentucky on June 29, and Daytona on July 6. A statement from the company said additional races with Kligerman and KBM are a possibility.
Posted by Dave Moody at 10:31 AM