Montoya Ready To Rebound In 2013


Just weeks after opening his season with a dominating win in the GRAND AM Rolex Sports Car Series Rolex 24 at Daytona, the Columbia native said his team’s recent struggles have tested both his confidence and his patience.
“I always said it would take about three years (to adapt to stock cars),” said Montoya. “And in year three, everything was good. We made the Chase. We were leading races and fighting for wins and stuff. Even the year after was good, (but) the next two years have been really hard years. As a team, when there were a lot of changes made, we just took a step back.”
Montoya said the team’s struggles were “not humbling. It sucks. I’ve won at everything I have been in, and I came to NASCAR and (ran) good. I know I can do it. To run where we’ve run, it hasn’t been fun. It hasn’t been fun for Chip, Jamie, myself, the crew chiefs, the organization, or Target.
“You always wonder, ‘can I do anything different?’ But even when you run good, you think about how you can make it better. It is hard. When the cars don’t have enough speed, you can compensate for a little bit, but if they aren’t good, they aren’t good. We are not miracle workers. You start trying different things, and sometimes you do more damage than help.
“Everything that could go wrong went wrong,” said Montoya of the 2012 campaign. “So, it was hard. They throw things at you that you can handle, and I’m good with it. It’s tough, but I’m motivated and I’ve been working hard. I don’t want to leave anything on the table.
“We know we have the right tools to make it work,” he said. “And I think we’ve done enough over the winter to put us in a better situation. Going to a new car helps. Taking away some of the things (other teams) were doing with the rear bushings, track arm bushings and track bars is going to make us more competitive, because they are going to lose some of their advantage.
“We finally put all the right tools and things in place,” he said. “Chip put in a lot over the last year, getting better equipment and more simulation and stuff into the team. I think it is paying off.” 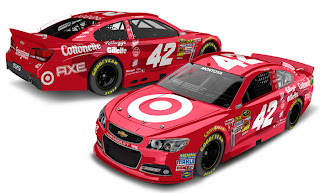 Despite two years of sub-par results, Montoya said he believes he is a better driver today than when he arrived in NASCAR, and never lost faith in his own ability.
“I think I’m a lot better driver than I was four or five years ago,” he insisted. “I have the open wheel experience (and) the stock car experience. I understand how races work (and) how everything is done. So, yes, I’m way better.”
“I am committed to Chip and to Target. We are committed to make this work. As long as that is the case, we’re going to try to make this work.
“Chip is committed to it. When he fired Brian Pattie and everybody else – when he didn’t think it was working and he needed new people -- he hired new people. As everybody starts coming together, you expect everybody to work perfect, side-by-side, from day one. But they have to understand the problem. One you understand the problem, then you can find solutions.”
Montoya also bristled when asked about the incident in last year’s Daytona 500 that saw him slam into a track jet dryer and trigger a massive blaze.
“(I get asked about it) way too much,” he said. “I actually got mad at somebody this morning for saying there is a bigger (dryer) now. People are dumb enough to think I hit the thing on purpose, like I really want to try and kill myself. It’s kind of crazy. That was a freak accident, and, I was very, very lucky to walk away from that one. Not only myself, but the guy driving the jet dryer. To walk away with nothing out of that it was a miracle. I was glad it was over.”
The former F1 star said tonight’s Sprint Unlimited will offer an important opportunity to learn and fine tune the new, Gen-6 race cars.
“I think it is going to show how the cars are going to draft, and how they are going to run,” he said. “I’m glad I’m in it. Last year, it was exciting when we got those two poles. They were a big deal for us.”
He also joked that the length of the individual segments will make no/ difference tonight, laughing, “For us to wreck, it takes about lap. 20 laps, 10… 5… it’s plenty.”
Posted by Dave Moody at 1:09 PM