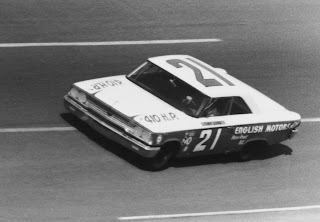 During Budweiser Speedweeks at Daytona, fans will be able to take a special glimpse into the storied history of Wood Brothers Racing as a replica of the 1963 Daytona 500-winning car – the No. 21 Ford Galaxie driven by Tiny Lund -- will be on display in the Sprint FANZONE. The replica car was constructed by Leonard Wood, who was recently inducted into the NASCAR Hall of Fame.

The car, which was part of Wood’s induction ceremony and will be on display for the next year at the NASCAR Hall of Fame in Charlotte, N.C., will make a special trip down to Daytona International Speedway for Budweiser Speedweeks to celebrate the 50th anniversary of the Wood Brothers’ first Daytona 500 win.


Before the 1963 Daytona 500, Lund didn’t even have a ride for “The Great American Race.” Ten days before the Daytona 500, Marvin Panch suffered severe burns when he crashed a sports car during testing for the 250-mile American Challenge Cup race. Among the first to arrive on the scene was Tiny Lund, who helped Panch escape from the burning car. For his efforts, Lund, along with several others, received the Carnegie Medal of Heroism.
Following the crash, Panch was unable to race in the Daytona 500 so Glen and his brother Leonard selected Lund to be his replacement and Lund went on to capture the Daytona 500, which was the first win for Ford in “The Great American Race.”
The Wood Brothers are the oldest operating team in NASCAR Sprint Cup Series history and most recently won the Daytona 500 in 2011 with Trevor Bayne.
The 1963 Daytona 500 winning car replica will be on display in the Sprint FANZONE throughout the Budweiser Speedweeks At Daytona. Sprint FANZONE will be open throughout Budweiser Speedweeks with the exception of UNOH Battle At The Beach on Feb. 18-19.
Posted by Dave Moody at 2:55 PM