Martin Set To Start Final Season In No. 55 Toyota 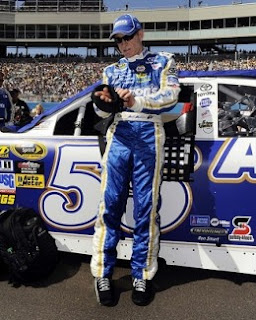 Mark Martin begins his 31st season in the NASCAR Sprint Cup Series Saturday night when he takes to the track in the Sprint Unlimited, followed by Sunday’s single-lap qualifying in preparation for the 55th annual Daytona 500 on Feb. 24.


The Batesville, Arkansas native said expects a busy first week in Daytona. He’ll join in NASCAR’s annual Media Day festivities on Thursday, before taking part in Friday practice for the Sprint Unlimited before racing Saturday night. He’ll also practice his Daytona 500 car Saturday and join in single-lap qualifying for the 500 on Sunday.
Martin will drive the No. 55 Aaron’s Dream Machine Toyota in 24 points races and two non-points races in 2013 for Michael Waltrip Racing. Martin said he has yet to determine his 2014 plans, but emphasizes he isn’t leaving MWR or NASCAR.
“I’m still working on that,” said Martin. “All I can say at the moment is I don’t expect to be in the No. 55 as the driver. My goal is to see MWR, (crew chief) Rodney Childers and the No. 55 car race for a championship.
“It might still be driving some, or I might be working with the pit crew or the drivers, who knows? It’s too early to tell. I’m focused on 2013. I’m having fun doing what I am doing now and plan to do everything that I can to try to win races and perform. The 2014 season is still a long way off, but I’m not going anywhere.”
While not superstitious, Martin said he cannot help but notice that this is the 55th running of the “Great American Race;” a number that coincides with the one on the doors of his Toyota Camry. “ 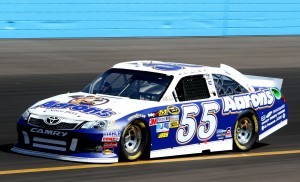 “I have noticed this is the 55th Daytona 500, and No. 55 is a pretty cool number, don't you think? We want to get Speedweeks started right with a good lap on Sunday. That gets us a good spot to start Thursday’s qualifying race. I think you are going to want to be as close to the front of the pack as you can be this year. Nobody knows what to expect.
“Based on all the wild stuff we saw in just a few laps of drafting at the test, I can guarantee it’s going to be exciting.”
Martin said he has high hopes for NASCAR’s new Gen-6 race car, based on preseason testing.
“The best thing about the car is the manufacturers’ identity is so much stronger,” he said. “It is a really cool looking race car. They look like the Toyota Camrys ] you can get at a dealership, with a lot of muscle thrown on them. That’s probably the best thing. There are subtle changes about the car that are improvements from a handling, speed (and) safety standpoint, (but) all those are more subtle. It’s a good looking race car.”
Martin said another successful season like 2012 will establish MWR – once and for all – as a top contending team in the sport.
“Without question, it would solidify them,” he said. “This year will judge whether you really get your position up there with the very top teams in the sport. If we’re able to come back and do what we were able to do last year or more than I think we’ll be seriously considered like the Roush and the Hendricks -- the very top teams.”
Posted by Dave Moody at 2:32 PM