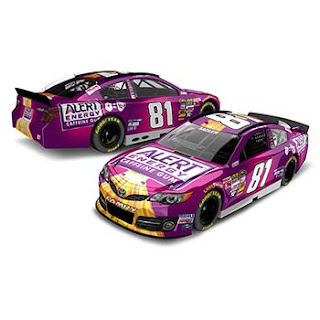 Wrigley is pulling its new “Alert Energy Caffeine Gum” from the market temporarily, as the United States Food and Drug Administration looks more closely into the proliferation of caffeine-added products in the marketplace.


Alert Energy Caffeine Gum has sponsored Elliott Sadler’s No. 81 Joe Gibbs Racing Toyota in a pair of NASCAR Sprint Cup Series races this season, with plans for another. A spokesperson for the company said today, however, that production and sales of the gum will be halted temporarily while the FDA clarifies its guidelines concerning caffeine-added products.
Wrigley North America President Casey Keller told The Associated Press today, "After discussions with the FDA, we have a greater appreciation for its concern about the proliferation of caffeine in the nation's food supply."
There is no word from Joe Gibbs Racing on how Wrigley’s decision may affect the Sadler sponsorship.
Posted by Dave Moody at 7:02 PM