Here’s a helpful hint for those attempting to quantify what’s wrong with the “new” Bristol Motor Speedway.

Not a damned thing.

Since the storied Bristol oval was resurfaced back in 2007, media and fans alike have debated whether the racing is better or worse. Without question, it is different. The old Bristol was a single-groove racetrack that specialized in freight-train racing. Everyone lined up single-file on the bottom of the racetrack in true “follow the leader” fashion, doing their best impression of a 110-mph conga line. Straying -- even momentarily -- from the bottom lane brought a sure and swift trip to the back of the pack. Once there, there was just one way for a driver to make his way back to the front: the infamous Bristol “Bump and Run” where you whack a man in the rear bumper, shove him up the race track and run like hell, least you receive the same treatment in return.

The new Bristol is a multi-groove affair that features plenty of side-by-side – and occasionally even three-wide – racing throughout the pack. Cars run two-abreast for laps at a time, and a driver with a good-handling car can race his way from the back of the pack without leaving a trail of twisted, smoking metal in his wake.

In the old days, a driver would spend 20 laps bottled up behind a much-slower car, unable to pass until his temper finally reached the boiling point and he harpooned the poor bugger out of his way. Today, he simply slides into the outside groove and drives around his slower opponent with no harm done.

At the old Bristol, multicar crashes were the order of the day and caution flags flew with maddening regularity. There was no such thing as pit strategy, since the race stopped every 15 laps for another round of flatbeds and fisticuffs. The fastest car rarely finished, much less won, and millions of dollars worth of high-tech racing machinery went directly to the scrap yard after every race.

It was little more than a County Fair demolition derby, with fancier paint schemes and better-known drivers. 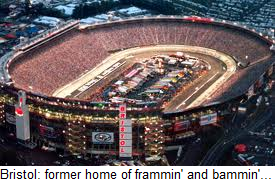 Lots of people say they miss the old Bristol Motor Speedway and the excitement it used to generate. Listen to them long enough and you’ll realize that by “excitement,” they really mean “wrecks.” They miss the crashing and banging, the smoke and fire and twisted sheet metal, the frayed nerves and post-race shouting matches. They miss the late Dale Earnhardt, winking at the camera and swearing on his momma’s heart that he never meant to wreck Terry Labonte. Just rattle his cage.

That’s all well and good, I guess. But personally, I prefer a stock car race to a demolition derby. I prefer green-flag laps to those run under yellow, and I enjoy taking a shower after the race without finding half a bag of oil dry in the drain. That’s not just me talking, either. The drivers seem to agree.

“We’re out there racing two (and) sometimes three-wide now,” said Kurt Busch this week. ”It gets three-wide pretty quick when you’re in traffic and the leaders don’t want to yield and give up time around those lap cars. It’s exciting to me. I think a lot of the drivers agree it’s a place now where…you have to have a little bit of finesse mixed in if you want to have success.”

“The track is perfect and fine,” agreed Dale Earnhardt, Jr. “There’s nothing wrong with it. It’s as good -- or better -- than it ever was.”

So enjoy the race Saturday night. And hold the oil dry.