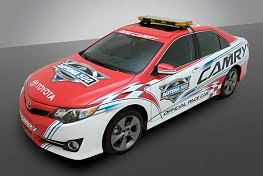 The 2012 Toyota Camry will serve as the Official Pace Car for the 54th running of the Daytona 500 NASCAR Sprint Cup Series race on Sunday, Feb. 26; the first time the manufacturer has provided the Pace Car for a NASCAR Sprint Cup race at Daytona International Speedway and the fourth different manufacturer to have pace a race at the “World Center of Racing” since 2010.

“Toyota has a successful track record of manufacturing in the United States and they have built upon that success in NASCAR’s top three national series,” Daytona International Speedway President Joie Chitwood III said. “The 2012 Camry is a sharp, sleek vehicle and it will look great at the head of the field in the 54th running of the Daytona 500. We’re proud to have the 2012 Camry, built by great American workers, pace the ‘Great American Race.’ ”

“We’re thrilled to be able to feature the new Camry in Daytona at the season’s biggest race,” said Ed Laukes, TMS corporate manager of motorsports marketing. “We think the Daytona 500 is the perfect place to showcase the all-new Camry, which will go on sale this fall. We knew when the opportunity arose to partner together with Daytona that it would be an extraordinary way to highlight our new Camry, as well as reinforce Toyota’s commitment to NASCAR and its fans.”