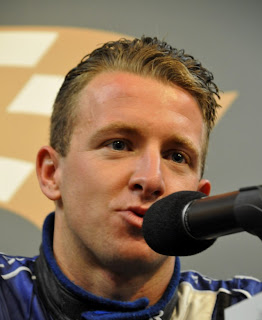 Penske Racing announced today that AJ Allmendinger will drive for the team in two IZOD IndyCar Series events this season, including the 2013 Indianapolis 500.


Allmendinger admitted today that while returning to the Penske camp after a failed 2012 substance abuse test is gratifying, the personal support shown by team owner Roger Penske means even more to him.
“It's amazing to go through the last year of what happened (and) get back to this point. For me to be able to run Indy is amazing, but (especially) to have Roger Penske (and) everybody at the Penske organization to ask me to come back and still be a part of the family. Roger told me the first day when I signed with him last year, `once you're in the family, you're always in the family.’
“As everything occurred, to have Roger not just say those words but act them; every week calling me to make sure I'm all right, make sure I'm doing the right things… being okay. That meant the world to me. To have him ask me to come back and drive one of his IndyCars here at the Speedway… that means more than anything I could have imagined.
“Roger didn't need to help me if he didn't want to,” said Allmendinger. “To have him do that (and) have Mike and IZOD come aboard and take a shot with me at this, it's fantastic.
“I feel excited about it,” he said. Just the short amount of time we've spent together; dinner last night, learning about the company, just being a part of it... for me it's kind of a second coming of a dream come true in a lot of different days.
Penske Racing president Tim Cindric said that while Allmendinger currently has only the Indy 500 and Barber Motorsports Park on his 2013 IndyCar agenda, “It's our goal to put together more races. Whether or not they're IZOD races or what have you, it's our goal to expand in whatever way we can.”
Allmendinger admitted that his return to an Open Wheel racer for the first time in seven years brings a certain degree of nervousness.
“I'm not going to lie, I'm going to be nervous as hell rolling out,” he said. “It was the same way when I was in a stock car. For me, when I haven't done something before, I have those nerves. I think it's a good thing. If I wasn't nervous, I wouldn't care. The anticipation of rolling out there first day for rookie orientation, it's going to be fun and nerve-wracking… so many emotions wrapped together at the same time. It's going to take a few laps to get used to it. Once I get used to it, it's down to business.

“There's (been) a lot of things that I had to go through as a person,” admitted Allmendinger. “Anybody that has been around me (knows) I always put the most pressure on myself. I always have and always will, whether it's the biggest strength of mine, or the biggest weakness.
“Last year, I was driving for Roger Penske, but things weren't going right, I was stressed, I wasn't myself. First things first, I had to figure out if I wanted to race anymore. (After the suspension), for the first time in 25 years I wasn't racing every weekend. In a way, it was good because I had to figure out if I wanted to continue doing that. I quickly learned as I watched races on TV, I did.
“I had to be happier first, before I got into a racecar. I always looked at it as, `if racing is going well, that will make everything else happy.’ But for me, it's the total opposite. When you get in the racecar, you're totally focused, physically and mentally; everything that goes with it.
“There are no secrets,” he said. “Nobody's perfect in life. Unfortunately, mine was played out on TV over one dumb mistake. But with that mistake, you can do two things. You can keep making those mistakes, or learn from them and be a lot better.
“I said it when I started (and) I'll say it every day. I'm a lot better for it. I'm a lot better mentally and physically, for whatever opportunity (lies ahead). I wasn't expecting the opportunity to be at the Indy 500 with Roger Penske, but that was something I had to work hard on. I feel a lot better for going through it. I can actually look at Tim Cindric, Mike Kelly (and) Roger Penske in the eye and say, `I'm ready to go and I'm going to work hard. I'm going to do all the right things.’
“Whether that's good enough in the end? I hope so. If not, I can look myself in the mirror and be happy with it. People may wonder why you get a second opportunity, but for me, it's just through hard work and being happier away from the racetrack. When I'm at the racetrack, I'm really happy.

“The sport will always humble you,” he said. “Most of the time, you'll have more downs than ups. It's the ups that make the downs worth it.”
Photos: Anne Proffit,