For Denny Hamlin, The Distractions Continue 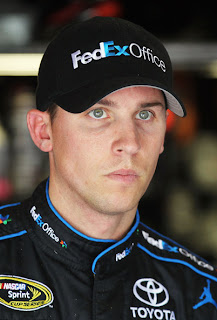 Sadly, inexplicably, Denny Hamlin continues to concentrate on everything but the job at hand.


The Joe Gibbs Racing driver announced recently that he will not appeal the controversial $25,000 fine handed down by NASCAR for comments critical of the sanctioning body’s new Gen-6 race car.
He also will not pay it.


“After a lot of thought I have decided not to appeal the fine NASCAR has issued,” said Hamlin last week. “Dragging myself, my team and NASCAR through the mud for the next two weeks would not be good for anyone. (However), I firmly believe I am in the right on this issue and will stand behind my decision not to pay.”
NASCAR responded quickly to Hamlin’s statement, saying that the fine will be handled according to Section 12-3 of the 2013 Sprint Cup Series rule book, which allows unpaid penalties to be deducted from the driver’s purse or point fund earnings.
It was a win-win deal, for both sides. Hamlin saved face by (technically) not paying the fine, while NASCAR delivered its desired message about not trash-talking their new race car. Amazingly, however, Hamlin refused to let the matter go.
Less than 24 hours later, he poked the NASCAR bear once again, telling a gathering of reporters at Bristol Motor Speedway that, “we won in the judge(ment) of the people. In hindsight, I really believe (NASCAR) overreacted, and I believe that they think they overreacted, once they thought about it a little bit.”
Hamlin also had harsh words for his fellow drivers, who he believes should have been more outspoken in support of his cause. “I think some of the peers of mine -- at least the ones that have a backbone had the nerve to stick up for what they know is right and wrong – agreed (with me),” he said. “Everyone wants to stay on NASCAR’s good side and that ultimately plays (into) a lot of what you hear in interviews. Ninety percent of what you hear on a weekly basis is just guys that are trying to stay on NASCAR’s good side. There’s very few that really give the honest and true truth.”
Fast-forward two more days, as Hamlin punts Joey Logano out of second place at Bristol, triggering a post-race shove-fest between their two teams and a subsequent round of testosterone-rich Twitter machismo that promises to plunge Hamlin into another week of meaningless – and damaging – distraction.
“Hey @dennyhamlin great job protecting that genius brain of yours by keeping your helmet on,” tweeted Logano after the race.


“Show you some love and appreciation,” wrote Logano, promoting Hamlin to ask, “Need my address?”


OK boys, settle down before someone actually has to throw a punch.


While hurt feelings and damaged egos are often a fact of life at Bristol Motor Speedway, Hamlin’s courtship of controversy once again threatens to derail his championship chase, before it begins.
In 2010, Hamlin interjected himself needlessly into someone else’s late-season controversy, making comments critical of Richard Childress Racing after then-RCR driver Clint Bowyer was penalized following the opening race of the Chase at New Hampshire Motor Speedway. After finishing second to Bowyer, Hamlin alleged that his rival's cars had been illegal long before New Hampshire, saying, “it’s something that's been going on for months. They've been warned for a long time… they knew it was wrong (and) they just wanted to get everything they could."
Those remarks led to a verbal exchange with RCR General Manager Mike Dillon and a warning from Childress himself, who said, "We’re a close-knit team. You're not going to win a pissing contest with a skunk, and you don't throw rocks if you live in a glass house." The following week, Kevin Harvick wrecked Hamlin in the opening minutes of practice at Dover, costing him valuable practice time and triggering another physical confrontation between pit crews.
The distractions continued all the way to Homestead Miami Speedway, where Hamlin’s late-season swoon culminated in an early crash and a 14th-place finish that cleared the way for Jimmie Johnson to claim his fifth consecutive Sprint Cup crown.
As a contender for the 2013 championship, Hamlin must learn from past mistakes. He and his Joe Gibbs Racing/Fed Ex Toyota team must have one focus -- and one focus only – if they hope to prevail this time around. Anything that distracts from their on-track performance must come off the table immediately, and remain off the table, once and for all.
Defending series champion Brad Keselowski lives and breathes stock car racing, 24 hours a day. Five-time titlist Johnson is also fully focused on the job at hand, and is seldom – if ever –swept up in off-track conflicts and histrionics. Keselowski and Johnson will not be defeated by a distracted driver, and Hamlin should know it by now.


The Joe Gibbs Racing driver stands at a pivotal fork in the road. He can continue to waste his considerable talent on petty distractions, meaningless feuds and Twitter testosterone, or he can let go of the silliness, focus on racing and walk the path of a true professional.
The choice is his.