Busch Back In Dominant Form At PIR 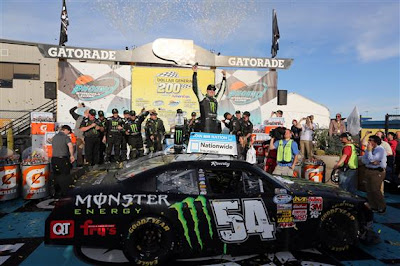 It was a day of returns for Kyle Busch Saturday at Phoenix International Raceway.


He returned to the cockpit of a Joe Gibbs Racing NASCAR Nationwide Series Toyota for the first time in more than a year, and not coincidentally, he also returned to Victory Lane.
Despite being caught speeding on pit road and banished to the back of the pack in the early going, Busch dominated the event, leading 142 laps en route to his 52nd career Nationwide victory and the first in his last 24 series starts.
"It was a phenomenal day for us to get back to Victory Lane (and) feel the taste of it again," said Busch, who went winless in 22 Nationwide starts for his own Kyle Busch Motorsports team last season and had not visited a NNS Victory Lane since Sept. 9, 2011 at Richmond International Raceway. He returned to JGR’s Nationwide program this season – reportedly at the insistence of team owner Joe Gibbs – and wasted little time proving the move to be a good one, starting on the pole and easily overcoming that early mistake to dominate the 200-lap affair.
"Oh, well, let's make a race of it," he joked after being informed of the penalty. "Let's go get it.
"I was almost nervous,” admitted Busch after the race. “(I was) feeling like it was my first win, even though it was No. 52 in the series. It's nice to be back."
Along the way, Busch led his 11,000 career lap, while clinching his seventh Phoenix trophy; five of them in the Nationwide Series. He has now accounted for 41 of Toyota’s 75 Nationwide Series wins, all-time.
Brad Keselowski was a game but well-beaten second, and said of Busch, “"It was pretty phenomenal how fast his car was and what he was able to do with it.” Justin Allgaier, Trevor Bayne and Elliott Sadler completed the Top-5.
Photo: Jerry Markland/Getty Images