Johnson: "I Probably Need To Keep My Mouth Shut" 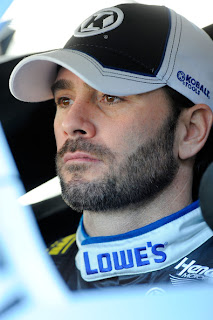 Five-time NASCAR Sprint Cup Series champion Jimmie Johnson said today that he will moderate his comments in the future, based on yesterday’s $25,000 fine assessed to Denny Hamlin for comments critical of the new, Gen-6 race car.


“The phrase ‘actions detrimental to stock car racing’ (is) something that I am going to try to keep top of mind,” said Johnson. “As my opinions come about, if it’s something that’s going to hurt our sport… I probably need to keep my mouth shut and head over to the truck and talk it out there rather than through microphones.”
“I think we’re all watching and learning as things unfold,” said Johnson. “We do know that NASCAR is sensitive to some things, and that line is becoming more defined right now as to what type of criticism is allowed and what is not.
“We’re all learning,” said Johnson, “and we’ve all been encouraged to have an opinion and speak our minds about each other as drivers, and on certain topics.”
Johnson also said that today’s steady rain at Las Vegas Motor Speedway will not undo the progress made in a full day of testing yesterday.
“Not sure the rain will undo a ton,” he said. “I’m glad we got on track yesterday. That was a good move by NASCAR to give us some extra time, on top of the fact that if we did have rain, we would all have on-track activity.
“I feel good,” he said. “We worked on race trim and qualifying trim. Our car was fast. It took us a few runs to sort out things down in (Turn) One and Two over the bumps, but once we got that under control then we had a lot of speed in our Chevy.”
He said he and crew chief Chad Knaus are “learning a ton” this week. “(At) Phoenix, things changed quite a bit. I can use Kasey Kahne and myself as an example. Their setup was very, very fast there last year, (but) they came back this year and had to work pretty hard to get it.
“We showed up at Phoenix and were fast, right off the truck. Coming here, running a very similar package to what worked here last time, it didn’t exactly work. The front end didn’t ride like it should, and we had to go to work and get the front end to stay down on the car and not bounce up and down so bad through the bumps.”
Photo: Jared C. Tilton/Getty Images North America
Posted by Dave Moody at 5:54 PM