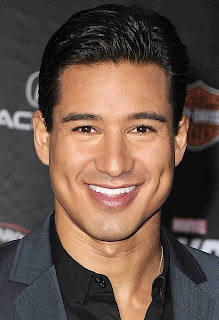 Mario Lopez is best known for his on-screen roles as A.C. Slater from “Saved By The Bell” in the 1980s, his stint on “Dancing With The Stars” and his current role as a host of the television entertainment show “Extra.”


He is also a major car guy, who loves NASCAR.
Lopez will be the Honorary Starter for the STP Gas Booster 500 at Martinsville Speedway on April 7.
“My dad is a big car lover and I grew up one too,” said Lopez, who will wave the green flag to start the STP® Gas Booster™ 500. “I’m honored and excited about being the honorary starter. I’ve been to several NASCAR races, but I’ve never done anything like this. I hope I do everything right.”
Although he has a love of cars instilled by his father, it wasn’t until his first trip to a NASCAR event several years ago as a guest of a track did he begin to appreciate the sport, its athletes and fans.
“I’ve always had a great time the times I’ve been able to go to races. The people are really nice and the racing is so exciting,” said the 39-year-old Lopez, who looks pretty much the same as he did when “Saved By The Bell” premiered in 1989. “TV just doesn’t do it (a NASCAR race) justice. You have to be there to see it and hear it. You have to be there and experience it all day long.”
It will certainly be a day-long experience for Lopez at Martinsville on April 7. His day will begin with a pace car ride, continue with a pit tour, private time with drivers, attendance at the drivers’ meeting, introduction to the crowd in prerace and finally, waving the green flag to start the race.
“NASCAR crowds are so very passionate, so very loyal. They know what they are talking about and I like that they really get behind their driver,” said Lopez. “And I’m really looking forward to this race. Martinsville is a short track, just a half-mile. You’re right on top of things and I understand a lot of things happen on the track there.”
Since he has been attending NASCAR events, Lopez has gotten to know some of the drivers fairly well. He counts Carl Edwards as a friend and said “Ironically in New York, I run into a lot of them. I had Jimmie Johnson on my show not long ago.”
Like most race fans, Lopez says NASCAR races are a great escape for him, a way to get away from everyday life.
“Going to a race gives me a break and I love sports in general. I always compare racing to boxing. It’s the only sport where you can be winning all day long and then it can be over in a minute,” said Lopez. “You can slip a little, lose focus , hit the wall and that’s it. That just doesn’t happen in other sports.”
The STP Gas Booster 500 NASCAR Sprint Cup Series race is scheduled for Sunday, April 7, the day after the Kroger 250 NASCAR Camping World Truck Series race. Pole Day is Friday, April 5. Ticket prices for the STP Gas Booster 500 start as low as $37. Tickets for the STP Gas Booster, the Kroger 250 and Martinsville Pole Day may be purchased by calling 877.RACE.TIX or by visiting www.martinsvillespeedway.com online.
Posted by Dave Moody at 2:56 PM