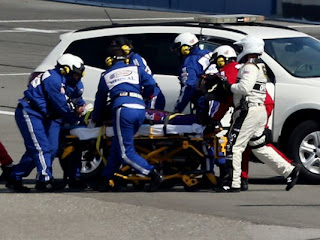 Joe Gibbs Racing confirmed moments ago that driver Denny Hamlin suffered a compression fracture in his first lumbar vertebra, an injury that could sideline the Virginia native from the next Sprint Cup Series race in Martinsville, Va., in two weeks.


Denny Hamlin suffered a compression fracture following an accident on the final lap of Sunday’s NASCAR Sprint Cup Series Auto Club 400 at Auto Club Speedway,” said the team in a written statement. “Hamlin hopes to be released today to fly to his home in North Carolina where he will be evaluated by Dr. Jerry Petty of Carolina Neurosurgery & Spine Associates later this week.”
Hamlin has experienced lower back issues for some time, but it is unknown whether that pre-existing condition played a role in Sunday’s injury. Hamlin tangled with rival Joey Logano while racing for the win on the final lap at Auto Club Speedway Sunday, and hit a non-SAFER barrier equipped concrete  wall on the inside of the track’s fourth turn. He exited the car under his own power, but quickly slumped to the ground and was attended to by track emergency personnel. He was airlifted to a local hospital to avoid post-race traffic tie-ups, and remained there overnight for observation.
Posted by Dave Moody at 3:02 PM