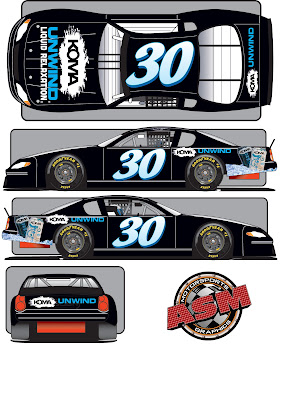 
Johnson has an extensive, winning resume in Late Model, Super Late Model, ARCA and NASCAR competition. He is a former Rookie of the Year and Late Model track champion on the fast, 3/8-mile asphalt Mizzou (MO) Speedway, and claimed ASA National Late Model Series "Rookie of the Year" honors in 2009. He finished third in the highly competitive "World Series of Asphalt Stock Car Racing" at Florida's New Smyrna Speedway in 2011, claiming six wins, 12 Top-10 and 14 Top-10 finishes that season. The Minnesota native has made seven career starts on the NASCAR Nationwide and Camping World Truck Series, along with 17 career ARCA starts, highlighted by a ninth-place finish at Toledo (OH) Speedway in 2010.
"I'm thrilled to be driving for Godfather Motorsports and KOMA Unwind," said Johnson. "I drove the KOMA Unwind Chevrolet Silverado in two Camping World Truck Series races in 2010, and thoroughly enjoyed my time with them. I'm excited to begin this new chapter of our relationship on Saturday at Hickory Motor Speedway; a track where I have lots of experience."
"We're thrilled to be associated with Jerick Johnson and Godfather Motorsports," said BeBevCo CEO Brian Weber. "Jerick is a talented young driver from a great racing family, and with the help and support of people like Godfather Motorsports owner Dave Moody, we think the sky is the limit."
In addition to the Pro All Stars Series program, KOMA Unwind has partnered with Johnson with his No. 76 POW / MIA Freedom car to participate in Military appreciation events throughout the country, giving back to those who have sacrificed for our freedom.
Johnson, Godfather Motorsports and the No. 30 KOMA Unwind Ford will make their 2013 debut in Saturday's "Easter Bunny 150" at North Carolina's legendary Hickory Motor Speedway. Time trial qualifying is scheduled to begin at 3 pm ET, with racing to begin at 6 pm.
Developed by BeBevCo., KOMA Unwind relaxes those who drink it; improving the duration and quality of their sleep with both flair and favor. KOMA Unwind is formulated to relax the body, mind and soul. It is the perfect lifestyle beverage for those who want to reduce stress and anxiety, and get a great night's sleep. The relaxation or "anti-energy" drink category is fairly new to the beverage industry. KOMA Unwind is dedicated to helping consumers achieve a level of relaxation without the use of pills or alcohol, fueling a "relaxation revolution" of consumers determined to chill without a pill.
Unite with KOMA Unwind for its "relaxation revolution" by joining us on Facebook (www.Facebook.com/KOMAUnwind) and following us on Twitter @KOMAUnwindNews.