Roush To Be Honored By TX Motorsports Hall Of Fame 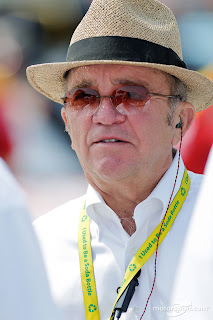 Jack Roush's success at Texas Motor Speedway has become a part of the speedway's history. Roush was the first team owner to sweep both events at the track, during its inaugural season in 1997. Since then, Roush has won 18 races as a car owner across NASCAR's top three national series at Texas Motor Speedway, including a record nine victories in NASCAR Sprint Cup Series competition.


His dominance at TMS has earned Roush the honor of becoming the 15th member inducted into the Texas Motorsports Hall of Fame. He will be honored Thursday, April 11, during the Texas Motorsports Hall of Fame Gala benefitting Speedway Children's Charities that will be held in The Speedway Club's Grand Ballroom.
Roush's induction culminates an evening that celebrates the accomplishments of motorsport's most talented drivers and contributors. Other honorees will be five-time NASCAR Sprint Cup Series champion Jimmie Johnson; 2004 NASCAR Sprint Cup Series champion Kurt Busch; IZOD IndyCar Series driver Graham Rahal; and legendary motorsports journalist Chris Economaki posthumously.
Roush has helped establish one of the most successful organizations in motorsports in Roush Fenway Racing. The organization stands as the winningest team in NASCAR history and boasts the most victories in both the NASCAR Nationwide and Camping World Truck Series. With Roush at the helm, Roush Fenway Racing has captured seven championships across NASCAR's three major series, including two Sprint Cup Series championships in 2003 and '04.
Texas Motor Speedway has become the "House of Roush" with his nine Sprint Cup Series wins and 18 in Sprint Cup, Nationwide and Camping World Truck Series competition. His Sprint Cup Series victory total is more than double the next closest owner - which is Rick Hendrick with four - and his most recent win came in last April's Samsung Mobile (now NRA) 500.
Roush joins an accomplished list of individuals that have been inducted into the Texas Motorsports Hall of Fame since it was established in 2003. He joins previous inductees A.J. Foyt (2003), Johnny Rutherford ('03), Terry Labonte ('04), Lee Shepherd ('04), Kenny Bernstein ('05), Jim Hall ('05), Eddie Hill ('06), Mark Martin ('07), Jim McElreath ('07), Bobby Labonte ('08), Bruton Smith ('08), Joe Gibbs ('09), John Force ('10) and Lanny Edwards ('11).
Johnson, who turned in his most dominating season at Texas Motor Speedway in 2012 with a victory in the AAA Texas 500 and runner-up finish in the Samsung Mobile 500, will receive the Texas Motor Speedway Racer of the Year award. In the AAA Texas 500, Johnson became just the second driver to win from the pole for his second career victory at Texas Motor Speedway. His win followed his previous performance during April's Samsung Mobile 500 where he led a race-high 156 laps en route to a runner-up finish behind Greg Biffle. In all, Johnson led a total of 324 of 669 laps in the two 2012 NASCAR Sprint Cup Series races at "The Great American Speedway!"
Busch has been instrumental in helping Speedway Children's Charities-Texas Chapter raise funds to benefit children in North Texas. He will be recognized as this year's recipient of the Maj. General Thomas Sadler Award. Busch has hosted some of Speedway Children's Charities biggest fundraising events that include the Kurt Busch Celebrity Bowling Tournament and Busch-Whacked Mud Run. In all, Busch has helped Speedway Children's Charities-Texas Chapter raise more than $40,000.
Rahal will receive the Texas Motor Speedway Sportsmanship Award for displaying a demeanor both on and off the track that exemplifies the meaning of sportsmanship. In June, he appeared headed to his second career IZOD IndyCar Series victory before his car brushed the wall and the bobble handed the lead and eventual victory over to Justin Wilson. Following the race, Rahal handled defeat as a true professional. His sportsmanship has been demonstrated off the track through his work with the Graham Rahal Foundation and his efforts to help the family of the late Dan Wheldon in 2011 by generating an auction that raised more than $600,000.
Economaki, motorsport's most noted and accomplished journalist, will be honored posthumously with the Bruton Smith Legend Award. Economaki left a lasting impact on the motorsports community through his work as both an editor and publisher forNational Speed Sport News and television commentator. His passion for racing helped him earn the title, "Dean of American Motorsports." His 74-year career as a journalist helped capture the early history of motorsports, covering premier events in NASCAR, INDYCAR and Formula One, among others.
A special VIP reception will be held prior to the awards ceremony beginning at 6:30 p.m. CT, followed by dinner beginning at 7:15 p.m. Fans can join in honoring the recipients by purchasing sponsorship or individual tickets to the Texas Motorsports Hall of Fame Gala.
Table sponsorships, beginning at $1,200, and individual tickets ($150) are available by calling the Speedway Children's Charities office at (817) 215-8421 or for more information, visit www.scctexas.org.
Posted by Dave Moody at 3:42 PM