Patrick Says "We Are Just Missing It" 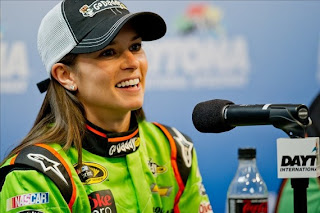 Danica Patrick said today that the key to improving her early season performance is to find more speed in practice and qualifying.


“I think I have actually been a little bit surprised how we unload,” said Patrick. “We have been closer unloading than I would have expected, (but) instead of progressing or staying there, we have kind of fallen off throughout the weekend.
“I think we need to strike a good balance when it comes to qualifying and the race,” she said. “Qualifying is the first step. I have been loose every single time in qualifying (and) that puts you in the back. You are already starting off down in the race. I have been loose every race except for the last one, where we were really tight. We kind of anticipated it, then we found out after we got done that the right-front toe was out pretty far from a hit really early in the race. That explains some of our challenges last weekend at Bristol.
“We just have to get the car balanced right when it counts, which is qualifying and race.”
Asked about the struggles experienced by the entire Stewart Haas Racing stable this season, Patrick said, “I don’t have a great feel for it. I feel like Tony or Ryan would have a far better answer for you. We were really good when it came to speed and the speedway. Then we went testing at Charlotte and all of a sudden it kind of switched, so I don’t know. Maybe we just need to find some grip. We are good when it comes to going fast, but when it comes to getting the car locked down on the track, maybe we need to find some downforce.
“I think the last few weeks have been very important,” she said. “That is the bulk of the season, to be honest. I’m not the best at this kind of stuff; all I know is that as a team, it’s not for a lack of trying. We will figure it out. For me and the No. 10 car, I know we need to get the car much closer when it counts.”
Patrick admitted that identifying the problem may be easier than solving it.
“If I had the answer of how to turn it around, we would just do it,” she said. “Obviously, it’s not that easy. We got to Phoenix, unloaded well and went into qualifying trim. (Then) all of a sudden the car was bouncing around and we never really got it back. In Las Vegas, we had a lot of testing and the car unloaded okay. Then it was really tight the first day (and) really loose the second practice day. We were loose in qualifying and extremely loose in the race.
“We are just missing it.”
Patrick said she works hard to avoid becoming frustrated, adding, “Every weekend, there is good and bad to it. You are going to remember the end of it the most. You can’t let it get you down, and you can’t be mad. I know I have a lot to learn, and I know that as a group we have a lot to learn together to figure out where the car is best for me, so we can be closer more of the weekend.
“But we will get it,” she said. “I’m not discouraged or afraid at this point. This is just the process that we go through. We will be fine.”
Photo: Kevin Liles-USA TODAY Sports
Posted by Dave Moody at 3:57 PM