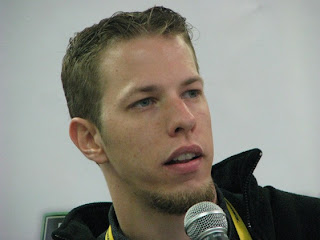 
“When I come here, I feel like I’m playing Tetris,” said Keselowski. “It’s such a mental and physical challenge. You never get a break. When you finally get one puzzle piece to fit, the next one is coming. You think you’ve got it all figured out, (but) it keeps going faster and faster and faster until it breaks you down mentally.
“I love that challenge (and) I know that if I screw up, somebody is going to hit me over the head with a hammer. If you just ride around here, you wreck. If you get too aggressive, you wreck. If you try to fall somewhere in-between, you have a bad day. The window is so small – and I love that.”
Asked if Sunday’s race could become an old-fashioned Bristol crash fest, Keselowski laughed, “You always have that potential. You just don’t know what drivers are going to show up. With this new car, it can be easy to overestimate your grip or underestimate it, and that’s when the trouble happens.
“When you have a new car you have unpredictability,” he said. “When you have changes to a track surface you have unpredictability. I think a lot of fans like… unpredictability. Unpredictability lends itself to drivers making mistakes and drivers making mistakes lends itself to action, so those are the things I think people look for.
“I think that can still happen, whether you have to run the top groove, the bottom groove or whether this track was multi-grooved to begin with.”
Like most drivers, the defending Sprint Cup champion said he has no idea whether Sunday’s race will once again be contested primarily in Bristol’s tricky outside groove.


“I tried and I hit the wall, so that’s good,” he said. “I hope that lane doesn’t come in at all. I hate that groove.


“The tires aren’t reacting because it’s a lot colder and this car itself has a lot more grip. It would have to get a lot hotter to have a chance for (high line racing) to happen. The warmer temperatures affect the way the rubber comes off the tires and the way it sticks into the concrete as well. That doesn’t seem to be the case this time around, which isn’t a bad thing.”