Bristol Motor Speedway has been a good track for Brad Keselowski and the Miller Lite team of late.  Keselowski and crew chief Paul Wolfe claimed back-to-back Sprint Cup Series wins there in 2011 and 2012, and hope to add a third consecutive victory this weekend.


“The spring race last year at Bristol was a race I will never forget,” said Keselowski, the defending NASCAR Sprint Cup Series champion. “That is by far the best car I have ever had. (It) was phenomenal. I have said a couple times what Bristol means to me, and that hasn’t changed. Bristol is one of those race tracks that defines (the) characteristics a driver should have to have to be successful. To win there makes me feel like more of a racing man. That place is very special. The way it challenges you both physically and mentally, it never gives you a break. It always demands the most out of you of any track I have been to both physically and mentally.


“There are other tracks more demanding physically, but not so much mentally. Bristol is both. To be successful there, you have to find another level. You have to find your zone and you have to find it quick. If you don’t, it won’t take long for you to be punished. I have really become accustomed to that track, (but) it seems like every time I run well there, there is a change -- whether to the facility or the rules -- to make it harder, but that is part of the challenge. It makes every win and accomplishment at that track so special.”


With three Top-5 finishes already in their column, Wolfe said he is happy with the start to the 2013 season. “So far we have gotten good results with three Top-5 finishes,” he said. “I think our short track program showed some strength at Phoenix, which is encouraging. We had a big test at Vegas to see where we were at on the mile-and-a-half tracks. So far, we are pleased with where we are at and it is nice to be able to start the season and not be in a big hole from a bad finish at Daytona. We are really happy with where we are at, but there are always a lot of areas where we can still continue to get better. 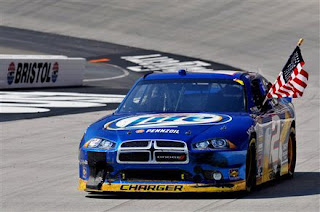 “We’ve have had a lot of success at Bristol in the past and we are excited about that and some of the things we learned at Phoenix and then last weekend surely will apply to our setup for Bristol.”

Despite an impressive run of recent success at Thunder Valley, Wolfe claims to still be searching for the magic set-up there.


“I don’t know if there is anything special that we have found,” he insisted. “It is a track that Brad has always run well at, and he understands what he wants his car to do and what he wants it to feel like in practice. It makes it easier for us to tune on the car, because he can help give good direction on what he needs to feel. Overall, we have a good baseline package. We just have to implement some of the things we have done different with the new car this year to that setup, and I think we can run strong there once again.”