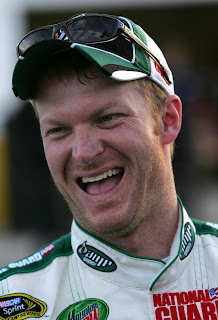 Dale Earnhardt, Jr., said today that he understood long ago that criticizing the competition leaves drivers subject to NASCAR sanctions.


“We were told a couple years ago to watch all the negative comments and tones,” he said. “After Talladega was a good example several years ago... I thought it was clear to all of us to be careful how we said what was on our mind. I don’t think (NASCAR) minds you coming up in the hauler and talking about what you think about the racing, how you think things could improve, or what might improve things. I think that they’re open to listening to that kind of stuff.
“We always want to get better and always want to strive to be better as a sport,” he said. “I think we’re going in a good direction (and) I like the new car. Obviously, I’ve had a couple good runs with it, so I’m excited about what we have going on.
Earnhardt said a major factor in the evolution of the new car is – literally – where the rubber meets the road.
“Things are only going to get better from here as we learn more and more about tires,” he said. “The tire is changing quite a bit with the way they’re trying to make tires, trying to go green on the tires and stuff like that. That’s really going to change the way the cars react. Everybody has to understand that the tire has a lot to do with how these cars drive. That’s what connects them to the race track. I think Goodyear is doing a good job trying to improve things and we’re learning a ton, so it involves more than just the vehicle itself. It’s all kinds of things and NASCAR is doing a lot of good things.
“There are a lot of good ideas moving around, a lot of good conversations happening that I’m happy to hear and happy to see going on. I think we’re going in a good direction.”
Earnhardt said that in his opinion, the racing can only improve as teams compile notes about their new cars.
“I think as we learn more and more about these cars and what makes them work and drive better, things can only get better as far as the product we put out there every week. It’s a new car, there’s a lot of things to learn and what everybody in the garage is trying to do is get an advantage on the rest of competitors.”
Posted by Dave Moody at 7:05 PM