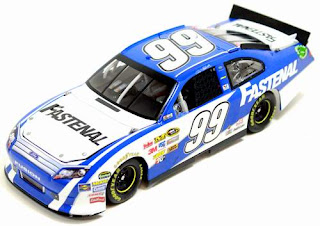 The 135th Annual White House Easter Egg Roll will kick off Monday, with Roush Fenway's No. 99 Fastenal Sprint Cup Ford Fusion featured at The Ellipse in the nation’s capital.


The 2013 Easter Egg Roll, which takes place on the South Lawn of the White House, is focused on promoting health and wellness with the theme, “Be Healthy, Be Active, Be You!” The event features live music, sports courts, cooking stations, storytelling and, of course, Easter egg rolling. The activities encourage children to lead healthy, active lives in support of the First Lady’s Let’s Move! initiative.
“It will be an honor to have the No. 99 Fastenal Ford Fusion on site at the White House,” said Pat Resch, Fastenal’s VP of Marketing. “We’re looking forward to being a part of this Easter tradition and presenting the Fastenal brand to 30,000-plus attendees.”
Fastenal, a Winona, Minn. based Fortune 500 company and North America’s largest fastener distributor, will debut a military-themed paint scheme over Memorial Day weekend for the Coca-Cola 600 on Carl Edwards' No. 99 Ford, as well as the No. 16 and No. 17 Sprint Cup cars driven by Roush Fenway Racing teammates Greg Biffle and Ricky Stenhouse Jr.
“This is a great opportunity to show a sign of respect for all branches of the military, and all of the men and women who’ve sacrificed for the freedoms we sometimes take for granted,” said Resch, a former member of the US Navy and National Guard. “We’re proud of all of our employees, but leading up to Memorial Day we’re especially proud of the hundreds of current and former military personnel who are part of our Fastenal Blue Team.”
Posted by Dave Moody at 5:41 PM