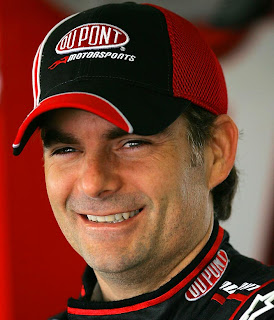 
And that’s a good thing.
Prior to last year's August race at Thunder Valley, the top groove of the track was ground in an attempt to make the extreme outside lane untraceable. Instead, it became the preferred line; a line that five-time Bristol-winner Gordon said reminded him of the early 1990's.
"I remember seeing guys like Darrell (Waltrip) and Davey (Allison) run that high line back in 1991 or 1992," said Gordon, who joined NASCAR's premier series full-time in 1993. "I was watching them from the spotters' stand and it was so cool to see them running right up against the wall. It was hard to pass, so you would see 'slide jobs' when they got a run.
"That's essentially the same kind of racing we had here in August. I had so much fun racing that way.”
Last August, Gordon finished third -- one of 16 Top-5 and 22 Top-10 finishes he has at the 0.533-mile oval. The four-time NASCAR Cup Series champion also has five victories, five poles and 2,647 laps led in 40 career starts. In order to carry another checkered flag in Sunday's Food City 500, however, he may have to go “old school” once again.
"As soon as rubber was laid down in the top groove and there was more grip there, we started putting all four tires up in that lane," said Gordon. "But with that lane being the preferred line, you had to make sure you completed the 'slide job' and gained the position.
"If not, you lost a lot of spots before you were able to work your way back in line."
Gordon said the intensity of that kind of racing will almost certainly play a role in Sunday’s race.
"With guys lined up behind you, ready to take advantage of any mistake you make, you have to be sure to complete the pas,” he said. “I saw some fender rubbing -- and some fired up driving -- last August. I'm sure the fans would love to see that again this weekend."
Gordon would like to see that, as well. In his rear-view mirror.
Posted by Dave Moody at 3:49 PM