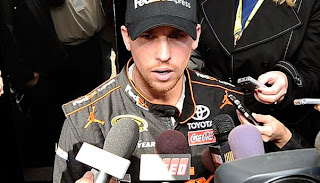 Less than 24 hours ago, Denny Hamlin expressed a desire to put his weeklong dispute with NASCAR behind him and get back to racing.


This afternoon, he poked the bear again.
“We’ve got bigger fish to fry than to argue over what I said just for $25,000,” said Hamlin to an assemblage of media members at Bristol Motor Speedway. “It’s better just to move on…”
Then, Hamlin then spent the next 10 minutes or so chastising the sanctioning body, all over again.
“I think that we won in the judge(ment) of the people…” said the Joe Gibbs Racing Toyota driver. “I had some conversations with (NASCAR CEO) Brian France, and we had a lot of the same ideas. In hindsight, I really believe they overreacted and I believe that they think they overreacted, once they thought about it a little bit.
“Now, we’re at a point that we’re good with each other, and we’re just going to move on from here.”
Hamlin said he is ctually a fan of the new, Gen-6 racer and understands that NASCAR is, “very, very sensitive about this car. This is their baby. What I was most frustrated with was it’s not even the opinion I have. I like the car. I think the car is better. That’s me giving the 100-percent honest truth. I was more frustrated with the tire that we were on than anything.
That’s the part that frustrated me. (It has) put me on an island feeling like I was bashing the race car, which was definitely not how I felt.”
Hamlin saved a few harsh words for his fellow drivers, who he believes should have been more outspoken in support of his cause.
“I think some of the peers of mine -- at least the ones that have a backbone had the nerve to stick up for what they know is right and wrong – agreed (with me),” he said. “Everyone wants to stay on NASCAR’s good side and so that ultimately plays (into) a lot of what you hear in interviews. Ninety percent of what you hear on a weekly basis is just guys that are trying to stay on NASCAR’s good side.
“There’s very few that really give the honest and true truth.”
Photo: Getty Images for NASCAR
Posted by Dave Moody at 3:50 PM