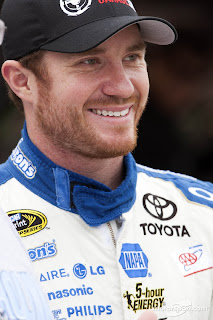 Brian Vickers returns to Bristol Motor Speedway this weekend, the track where he made his NASCAR Sprint Cup Series debut for Michael Waltrip Racing back in 2012.


And what a debut it was.
Vickers led 125 laps and finished fifth that day; a successful start that carried through the remainder of the season, with three Top-five and five Top-10 finishes in eight starts for the Rodney Childers led team. Not surprisingly, MWR has penciled both Bristol races onto the 29-year old Vickers’ nine-race schedule again this season, along with Martinsville (2), Loudon (2), Sonoma, Watkins Glen and Kentucky.
Despite making his first start of the season and his first ever in the new, Gen-6 racer, Vickers said he does not feel like he will race at an advantage this weekend.
“I don’t think so,” said Vickers, who scored more points (81) than any other driver at BMS last season. “I’ve been racing at all these tracks for a decade and they don’t change that much in a year. I’m going to be on all the tracks in the Nationwide Series this year. I’m going to be in the 2013 Toyota Camry car some (and) probably going to test it more, as well. I don’t think the differences between the old car and the new car are so great that running it nine times versus 30 times is going to matter.”
He said he will rely heavily on crew chief Rodney Childers and the Aaron’s Dream Machine team to allow him to hit the ground running.
“He is an integral component to the team’s performance, the organization’s performance and my performance,” said Vickers. “All that flows down from the top and he’s done a phenomenal job. I’ve known Rodney for 20-plus years. He was the guy that got me into go-karts, so working with him again has been a pleasure on two fronts. One, he builds really good cars. And two, we have a great relationship.”
While happy with his performances with the team last season, Vickers said he is hungry for more in 2013.
“I would have loved to have won one of those races (last year) and we came very close. Obviously, (I’m) very pleased with the results and how it all worked out, considering it was part time. Personally, it was a phenomenal year. I got to race all over the world. I got to run in races that my peers dream about running. They may never get that chance because they’ll spend their whole career here.
“I came back, so it’s clearly a good place to be. I love NASCAR, but to have the opportunity to run those races all around the world was great. I would love to do it again one day. Not any time soon, though. I still want to win a Sprint Cup championship, but I would love to go back.”
Posted by Dave Moody at 5:17 PM