Vickers Will Drive For Gibbs After Martinsville 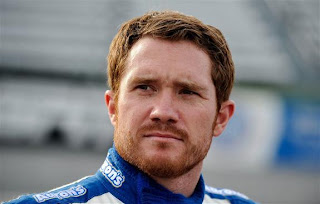 
The team had previously announced that veteran Mark Martin would be behind the wheel of the No. 11 Toyota while Hamlin recovers from a fractured L1 vertebra suffered in a last-lap crash at Auto Club Speedway in Fontana, Cal. Last week. Martin will still drive the car at Martinsville Speedway, with Vickers taking over the duties beginning in Texas.
“Obviously, having to find someone to fill in for Denny is not an ideal situation to have to be in,” said JGR president J.D. Gibbs. “When you start a process like this, you obviously begin to look at the drivers that are not only available, but also able to drive for your race team and manufacturer. We were a bit premature in determining Mark’s status past Martinsville, (but) we’re real happy to have the opportunity to get Brian in our Cup cars. With him driving Nationwide for us, we think we have some continuity there that is beneficial.
“We really appreciate everyone at Michael Waltrip Racing and Toyota for working with us through this process,” added Gibbs. “The good thing for us is that we have drivers the caliber of Mark and Brian to help fill in until Denny comes back.”
Vickers is currently driving JGR’s No. 20 Dollar General Toyota in the NASCAR Nationwide Series. He has recorded two Top-10 finishes through the first five races of the season.
He has 264 career NASCAR Sprint Cup Series starts over his 11-year career, with two wins, 24 Top-5 and 63 Top-10 finishes. He has one start this season, finishing eighth in at Bristol Motor Speedway for MWR. Last season, Vickers made eight starts for MWR, with three Top-5 and five Top-10 finishes.
Posted by Dave Moody at 12:25 PM