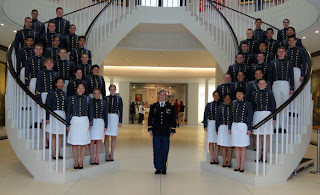 The Virginia Military Institute’s Glee Club will perform the National Anthem prior to Sunday’s STP Gas Booster 500 at Martinsville Speedway.


The group from VMI has performed the national anthem at Martinsville Speedway in the past, and has received accolades for its traditional rendition of the song.
The VMI Glee Club, founded in 1852, has performed around the world in its 160 years of existence. It is the oldest Cadet organization in VMI’s 165-year history. The cadets in the Glee Club are enrolled in Reserve Officer Training Courses at VMI, located in Lexington, VA, and are available to commission in all branches of the US Armed Forces upon graduation.
The green flag falls on the STP Gas Booster 500 at 1 p.m. Sunday.
High Point University’s Pep Band, which has been performing since 1927, will play the national anthem before the start of the Kroger 250 NASCAR Camping World Truck Series Saturday at Martinsville. The race is scheduled to begin at 1:30 p.m.
The HPU Pep Band consists of 29 members from 10 different states, pursuing degrees in more than 17 fields of study.
High Point University student and driver of the No. 3 Bass Pro Shops Chevrolet Silverado, Ty Dillon will compete in the Kroger 250 following his school’s national anthem performance. Older brother, Austin Dillon, a regular on the NASCAR Nationwide Series, is a communications major at High Point University.
Posted by Dave Moody at 6:13 PM