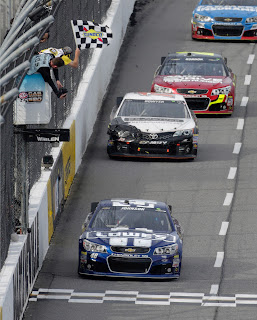 Jimmie Johnson pitched a perfect game at Martinsville Speedway Sunday, started on the pole after a track-record qualifying run, then leading 346 of 500 laps en route to a dominant win in the STP Gas Booster 500. The win was Johnson’s 62nd career NASCAR Sprint Cup Series victory and his eighth at Martinsville, becoming the track’s winningest active driver. Clint Bowyer overcame an early crash that damaged the right-front corner of his Toyota heavily to finish second, while Jeff Gordon bounced back from overshooting his pit stall at mid-race to finish third, followed by Kasey Kahne and Kyle Busch. Brad Keselowski, Jamie McMurray, Marcos Ambrose, Greg Biffle and Mark Martin completed the Top-10, with Martin subbing for the injured Denny Hamlin.


“We had a great weekend’ probably the most calm, relaxed, thought-out weekend we’ve had,” said Johnson after the win. “We really fell back on our experience and stayed committed to that. We had to adjust on the fly (since) the track changed more than we thought it would. And then the 15 and the 24 showed up and I had my hands full.”
Johnson’s eighth Martinsville wins now ranks him third on the all-time list behind Richard Petty (15) and Darrell Waltrip (11). With their 20th Martinsville win, Hendrick Motorsports broke a tie with Petty Enterprises for the most all-time Martinsville victories.
Despite finishing second in a badly wrinkled car, Bowyer said he let an opportunity slip away. “We had a good car all weekend long, so it’s incredibly disappointing,” he said. “Second is decent in this sport, but it still sucks.”
Johnson now assumes the Sprint Cup Series point lead by six over Keselowski. Dale Earnhardt, Jr. slipped to third in points with a 24th place finish; his first finish outside the Top-10 in six starts.
Unofficial Rundown
Finish # Driver