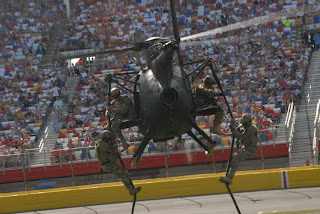 Batten down the hatches, the Coca-Cola 600 Pre-Race Show is approaching!

Charlotte Motor Speedway will continue their tradition of paying tribute to the U.S. Armed Forces with a Welcome Home Our Troops pre-race spectacular at the May 26 Coca-Cola 600. The program will include a one-of-a-kind air parade with 10 vintage war birds, a patriotic flyover and a flight by an American bald eagle over the infield during the national anthem.


“When the sequester took away military flyovers earlier this year, we heard from hundreds of fans who wanted to know what we were going to do at the Coca-Cola 600,” said Marcus Smith, president and general manager of Charlotte Motor Speedway.
“Instead of doing less, we’re going to ramp it up and give the fans more aircraft than ever before as part of our spectacular military pre-race tribute on Memorial Day weekend. The Coca-Cola 600 will again carry on our tradition of providing the most race-day entertainment found anywhere on the planet.”
Bridging the worlds of military and motorsports, the pre-race flyover will include P-51 Mustangs, owned by NASCAR Sprint Cup Series team owner Jack Roush. 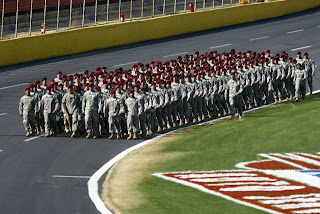 The Welcome Home Our Troops Coca-Cola 600 pre-race show will also include a performance of “I Will Give My All” by country music artist Jamie Tate and the 82nd Airborne All-American Chorus, a bagpipe performance of “Amazing Grace” by the Charlotte Fire Department Pipe Band and “Taps” played by a Fort Bragg bugler. There will also be a 21-gun salute from the Fort Bragg Firing Squad.
Fans will be able to salute the troops when 600 soldiers from Fort Bragg walk through the grandstands to the infield to participate in pre-race ceremonies.
In addition, NASCAR drivers and Charlotte-area VIPs will participate in special welcome home and military dedication video messages that will be displayed on the world’s largest HDTV, and a gigantic American flag the size of a football field will be unfurled across the frontstretch.
Medal of Honor recipients Bob Patterson (Vietnam), Gary Littrell (Vietnam) and Walter Joseph Marm (Vietnam) will be recognized on the pre-race stage.
The only 600-mile event on the NASCAR schedule, the Coca-Cola 600 tests the endurance of both drivers and equipment and provides fans more entertainment value than any other sporting event in America.
Tickets for all May races at Charlotte Motor Speedway can be purchased online at www.charlottemotorspeedway.com or by calling the speedway ticket office at 1-800-455-FANS (3267). Fans can purchase two frontstretch tickets with excellent views of pit road and the world’s largest HDTV for just $99 to the May 26 Coca-Cola 600.
Posted by Dave Moody at 3:40 PM