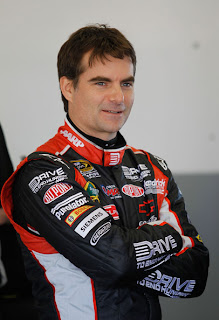 
And one very memorable runner-up finish.
Last September at the 3/4-mile track, Gordon entered the final race of NASCAR’s regular season on the outside of the 12-driver "Chase for the NASCAR Sprint Cup," looking in. He qualified second, but fell nearly two laps behind the leaders after the halfway mark of the 400-lap race. Gordon and the No. 24 Drive To End Hunger team battled back onto the lead lap, though, gradually fighting their way through the field to claim a runner-up finish that qualified the former series champion for the Chase.
"That certainly was memorable; probably my most memorable second-place finish," said Gordon. "We struggled early, but regrouped during the rain delay and never gave up, fighting all the way to the checkered flag. That never-give-up attitude is what I love about this team."
Gordon has faced adversity this season, as well. A strong performance at Bristol Motor Speedway ended with a heavily damaged car, while a top-three run in Texas was spoiled by a left-front hub issue. Despite those poor results, he is still 15th in the NASCAR Sprint Cup Series point standings after eight races; a position he did not attain until after race No. 20 at Indianapolis a year ago.
"We've made some gains with the Gen-6 car - especially on the intermediate tracks," said Gordon, who started 43rd at Kansas last weekend and finished 13th. "But I'm really looking forward to running this Chevy SS on a short track this weekend."
Along with two wins at the Virginia track, the four-time NASCAR Cup Series champion has 16 Top-5 and 25 Top-10 finishes in 40 starts, with an average starting position of 7.9. He has also led 1,415 laps, tops among active drivers at Richmond.
Bettering those numbers, however, will require some guessing.
"When you practice during the day and race at night, you have to guess," said Gordon. “I feel like every time we race here, something is changing. I feel like we are advancing the technology of the cars,  gaining more downforce and gaining more mechanical grip. You are always trying to figure out what combination is going to work best for the night race.
"We've been very successful three out of the last four times here, but we also missed it big one of those times. Our goal is to find that right balance, and make sure we don't miss it big."
Posted by Dave Moody at 11:50 AM