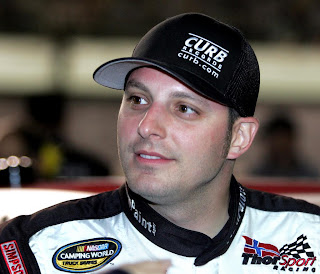 Johnny Sauter has won two of the first three NASCAR Camping World Truck Series races of the season – finishing a solid fourth in the other – and returns to Kansas Speedway this weekend, when he is the top-rated Truck Series driver over the last eight seasons.


That’s the kind of thing that’ll make a driver confident.
ThorSport Racing’s No. 98 Carolina Nut Co./Curb Records Toyota holds a comfortable lead in the series' standings, and Sauter is fired-up to be back in Kansas, despite a day where the temperature has yet to hit 40 degrees.
"Kansas is one of those places I just like going to, in general," said Sauter, who leads the championship standings by 16 points over Jeb Burton and 20 over ThorSport teammate Matt Crafton. "I like that part of the country a lot. I spent a lot of time there when I drove for Yellow Transportation, and it's just a good part of the country.  It reminds me a lot of home (in Wisconsin) and we've always seemed to run pretty well there.
"It's just a good racetrack with great fans, as far as I'm concerned."
Sauter's average start in four Kansas races is eighth, with an average finish of ninth. His average running position in his four career starts there is 6.7, a leading factor in his two Top-5 and three Top-10 finishes.
"Handling is always important and ultimately wins every race," Sauter said. "I keep going back to Michigan and Pocono, two racetracks that were fresh repaves for us last year. We had a really strong truck at Michigan, where we ran in the top three all day and we have the same truck in Kansas -- No. 38 -- which finished fifth at Kansas in 2011 and we won with it there in 2010.
"It has always had speed on freshly-paved racetracks and I think that bodes well for us."
Sauter said the track’s new, progressive banking has the potential to produce a second racing groove Saturday. He is also looking to one of his ThorSport Racing teammates to provide a potential ace in the hole.
"I'm lucky to have Frank Kimmel, my ARCA teammate, who raced there last fall," Sauter said. "We all watched the ARCA and Cup race weekend last fall and it was fast! I called Frank on my way home from Rockingham (last Sunday) and I was picking his brain about it. He said it has a lot of grip and more banking than it used to have because of the progressive banking. It's a whole new deal and I'm hoping it will lead to multiple grooves to race in.
"Typically, when they repave a racetrack, it's essentially one groove and extremely fast. So (at first) I would anticipate a fast, one-groove racetrack -- and track position will be real important.
"But the cool thing is, it was repaved last summer, and it's essentially sat for eight to 10 months. It's had a tough winter on it, so I think that helps make it double-file racing. It's not going to be totally new, and from everything I've heard it's going to be super-fast."
Posted by Dave Moody at 5:30 PM