Smith Back With Phoenix Racing at Martinsville 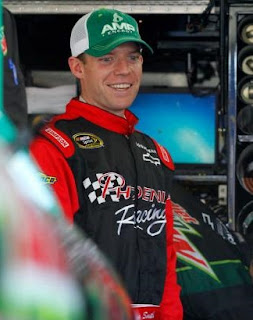 Regan Smith returns to the cockpit of the No. 51 Hendrickcars.com Chevy for Phoenix Racing in Sunday's STP Gas Booster 500 at Martinsville; his first Sprint Cup Series start since the Daytona 500, when he piloted the No. 51 car to a seventh-place finish.


Smith has eight Sprint Cup Series starts at the half-mile oval, finishing inside the Top-20 three times and in the Top-15 twice. His best finish was a 13th, in 2011. Phoenix Racing is hanging tough the Top-10 of the Sprint Cup owner point points, currently standing ninth, just 12 points outside the Top-5.
"My last race with Phoenix Racing was pretty awesome. We got a Top-10 at Daytona, and they've been doing a great job since then. I'm really excited about working with them again and hopping into the Hendrickcars.com Chevy. I'm looking forward to another great race together.
"Martinsville is definitely a track that reminds me of my old short-track racing days,” he said. “There's lots of close racing, lots of beating and banging. You might even see a few spins along the way. Aero means almost nothing at Martinsville. A lot of this race is in the driver's hands, but you've got to have a car that turns through the center of the corners. You've got to be able to get off the corners and back on the gas before you hit the long straightaways.
"Track position is huge there. The closer you get towards the end of the race, the more gambles you start seeing with two-tire or fuel-only stops. Tires are pretty important there, so you're really taking a gamble when you sacrifice tires, but there have been a few teams that have made it work the last few races.
"I've had two of my best finishes at Martinsville in my last two starts. Hopefully that's a trend that we can keep going this weekend."
Posted by Dave Moody at 5:12 PM