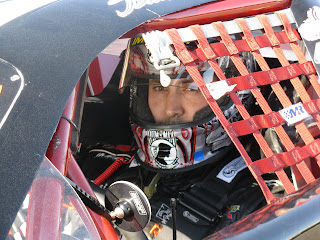 Driver Jerick Johnson and the No. 30 KOMA Unwind Chevrolet will make their second start of the 2013 season Saturday night in the “Racing Radios 125” Southern Super Series Late Model race at Gresham Motorsports Park in Jefferson, Ga.


With a new engine installed under the hood after problems in the season-opener at Southern National Motorsports Park two weeks ago, Johnson said the team has set high goals for Saturday night.
“The KOMA Unwind Chevrolet was fast at Southern National,” said Johnson. “Fast enough for a Top-5 finish, I believe. So our goal for Saturday night is to bring home a Top-5, or maybe even a podium finish. I know the car is capable of it, and crew chief Jim Gallison, Jr., has made some additional changes that should make us better in both qualifying and the race.
“I’m ready to get out there and show people what we can do.”
Time trial qualifying for the Southern Super Series Super Late Models will take place at 5:30 pm, with all cars impounded after qualifying. A special, on-track driver autograph session will take place immediately after qualifying is complete, with Opening Ceremonies at 6:35 and Feature Events beginning at 6:45. The Southern Super Series Late Models will be joined on the card by Gresham’s weekly Mini Stock, Sportsman/Renegade, Truck and Outlaw Late Model divisions.
About Godfather Motorsports – Godfather Motorsports is owned by Motor Racing Network and Sirius XM NASCAR Radio personality Dave Moody and enjoys major sponsorship from Bebida Beverage Company’s KOMA Unwind "Liquid Relaxation" drink. The team also boasts a comprehensive list of technological and marketing partners that includes Eibach Springs, ASM Graphics, Race 101, CV Products, ARBodies, Phantom Racing Gear and XFlex Crash Tape. For additional information on the team and marketing opportunities with Godfather Motorsports, contact Dave Moody -- mrnturn1@hotmail.com. Visit the Godfather Motorsports website at www.GodfatherMotorsports.com.


About POW*MIA Awareness – Godfather Motorsports is proud to support the POW*MIA Awareness Campaign. Driver Jerick Johnson has long been an advocate for veterans’ rights and the United States military. He is a five-time Distinguished Guest of the American Legion National Convention and has earned numerous awards from other veterans’ organizations. Promoting and increasing public awareness of the POW*MIA issue has become his main goal. `Prisoner Of War: Missing in Action’ refers to any soldier taken prisoner by the opposing side during an action of war. It is not always known whether that solider is alive or dead, only that they are missing. Our goal is to remind our fellow Americans that the greatest tragedy of all is to be forgotten, and honor those who have given so much. Jerick thanks Godfather Motorsports for the opportunity to help increase awareness of this issue by carrying the POW*MIA logo on the No. 30 KOMA Unwind Chevrolet.