“We’ve had a 15-year presence in NASCAR and this is the first time we’ve sponsored a car in any NASCAR series,” said Matt Jauchius, chief marketing officer for Nationwide Insurance. “We built a solid relationship with Roush Fenway and two-time NASCAR Nationwide Series champion and Nationwide Insurance member, Ricky Stenhouse Jr., and we’re eager to carry that momentum forward and enhance our existing integrated NASCAR marketing platform.”

The No. 17 Nationwide Insurance Ford Fusion will contend in NASCAR Sprint Cup Series races on Aug. 24 at Bristol (Tenn.) Motor Speedway, Sept. 7 at Richmond (Va.) International Raceway and Oct. 20 at Talladega (Ala.) Superspeedway. The race dates in 2014 are yet to be determined. 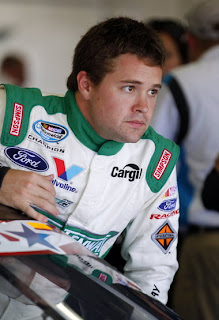 “This new partnership broadens our reach to NASCAR fans on Sundays,” Jauchius added. “We remain fully committed to the NASCAR Nationwide Series, its teams and drivers, our loyal partners and the rabid fans. Nationwide Insurance continues to have positive conversations with NASCAR regarding the Series entitlement renewal which began in mid-March and are on-going. It’s a very detailed process and we expect it will take a while, but NASCAR is a great place to be for active sponsors, like us.”

Nationwide Insurance is in its sixth year of a seven-year agreement as the title sponsor of the NASCAR Nationwide Series – the second-most popular form of motorsports in the United States - and is the official home, life, auto and farm insurance sponsor of NASCAR.

“I’ve really enjoyed working with Nationwide Insurance so much over the past three years as both their champion and as a Nationwide Insurance member,” said Stenhouse. “They feel like family and to be able to continue that relationship with our No. 17 team means so much to me because of who they are and all that they stand for. I’ve had Nationwide on my side for my entire NASCAR career, and I’m excited that they are going to continue being there for me.”

“Nationwide Insurance has been a terrific partner for the entire sport, and we’re proud to be representing them on the track with Ricky and the No. 17 team as their involvement in NASCAR grows,” said Roush Fenway president Steve Newmark. “Our relationship with Nationwide Insurance has always been a strong one and we’ve constantly been impressed with their marketing prowess and innovation in our sport. We’re looking forward to growing our partnership and driving success for their business – on and off the track.”