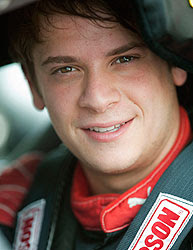 “I am really happy to be joining JD Motorsports and racing the No. 4 Flex Seal Chevrolet in the NASCAR Nationwide Series,” said Cassill. “I went down to the shop and met with Johnny and the guys, and I am excited for the opportunity. I look forward to helping them improve over the course of the season, and I believe we can race competitively starting at Texas.”


Cassill, 23, comes to the team with vast racing experience over the past five years, including winning the 2008 NASCAR Nationwide Series Rookie of the Year. He began his racing career when he first entered a quad race at the tender age of three-years-old, then progressing to karting where he won two Kart Series National Championships and four International Kart Federation Championships.


Cassill then became the youngest winner in the ASA Late Model Series in 2003 by a winning a North Series event at Lake Erie Speedway at the age of 14, his first foray into stock car racing. He began his NASCAR career through the GM Racing Development competition and was signed by Hendrick Motorsports in December of 2006. He tested the team’s Car of Tomorrow program as the lead driver in their Research and Development department, which accumulated 13 of the first 16 NASCAR Sprint Cup Series COT race wins. In 2008 Cassill began a stint at JR Motorsports where he ended the season with 19 starts, five Top-10’s, one pole and the NASCAR Nationwide Series Raybestos Rookie of the Year honor. Cassill continued testing with Hendrick Motorsports and completed one start in Phoenix Racing’s No. 1 Miccosukee Chevrolet at Memphis Motorsports Park in 2009, where he finished 10th. The year 2009 saw Cassill take on the challenge of qualifying for his very first NASCAR Sprint Cup Series events. 2012 marked Cassill’s first full-time season on the NASCAR Sprint Cup Series. Cassill drove the No. 83 Burger King Toyota to seven top-20 finishes for start-up team BK Racing. For 2013, Landon will also be competing in the Sprint Cup Series, racing the No. 33 Circle Sport Chevrolet.


“JD Motorsports is pleased to announce the addition of Landon Cassill to our team. His experience in both the Nationwide Series and the Sprint Cup Series will help to improve our entire program,” stated Johnny Davis, owner and CEO of JD Motorsports.


“We are very excited to have Landon on the team. Landon brings with him a great deal of experience and success and we think he’ll do a tremendous job moving the team forward. We would love to see him in the winner’s circle!” stated Phil Swift, owner of Swift Response LLC, maker of Flex Seal.