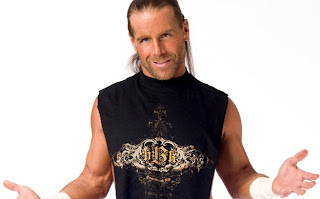 After a career of driving opponents to the mat in professional wrestling rings with his signature "Sweet Chin Music" finishing move, WWE Hall of Famer Shawn Michaels will grab the wheel of the "No Limits" Wild Asphalt Circus Chevrolet Camaro Official Pace Car and lead the 43-car field to the green flag for Saturday evening's NRA 500 NASCAR Sprint Cup Series race at Texas Motor Speedway.


Considered one of the most gifted sports entertainers of all time prior to retiring in 2010, Michaels now gets the rare opportunity as a celebrity to pace the stars of the NASCAR Sprint Cup Series for the start of the NRA 500 in the Official Pace Car. NASCAR has granted Texas Motor Speedway special permission to allow Michaels to drive the car pending a mandatory on-track orientation prior to race.
Michaels is just the third celebrity in the history of Texas Motor Speedway to earn the honor, following movie star Vince Vaughn (2007 Dickies 500) and former Texas Rangers pitcher C.J. Wilson (2010 AAA Texas 500). Former Dallas Stars great Mike Modano also was bestowed the honor, but had his moment washed out for the April race in 2010 when the Samsung Mobile 500 was postponed until Monday due to rain.
Michaels, known as "The Heartbreak Kid," is a three-time WWE champion and three-time Intercontinental champ who also captured a World Heavyweight Championship, European Championship and World Tag Team Championship during an illustrious 26-year career that culminated with an induction into the WWE Hall of Fame in 2011. Though retired, he recently returned from his 17th WrestleMania appearance that took place at New Jersey's MetLife Stadium.
Since his retirement from the ring in 2010, Michaels has been serving as an ambassador of the WWE as well as spending time in the stands at Lil' Texas Motor Speedway watching his son Cameron Hickenbottom compete in the Bandolero Outlaw Division. Hickenbottom won the Winter Series Championship at Texas Motor Speedway's Lone Star Legends earlier this year and is competing in the Battle at the Big Top at Lil' Texas Motor Speedway during the NRA 500 race week.
Michaels also can be found on The Outdoor Channel as he enters his third year as co-host with Keith Mark on the award-winning MacMillan River Adventures. Season three will begin on July 2.
Tickets for the NRA 500, the first primetime Saturday night race of the NASCAR Sprint Cup Series season, are still available by calling the ticket office at (817) 215-8500 or by visiting www.texasmotorspeedway.com.