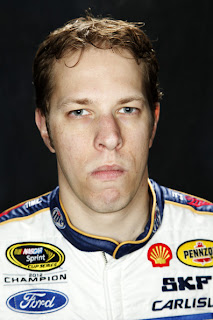 Brad Keselowski turned in a disappointing effort in qualifying for Sunday’s STP 400 at Kansas Speedway, qualifying 33rd out of 44 cars.


But he had a good excuse.
“My seat belts came undone,” revealed the defending NASCAR Sprint Cup Series champion. “It was just one of those weird deals. I had a chance and I fixed it, and got back going.”
Keselowski said that even without the malfunction, the lap was not up to his expectations. “It wasn’t what we were looking for, for sure,” he said. “We didn’t make it through the center of the corner with as much speed as we need to be fast, so we’ve got to work on that.
“(The track is) a little bit rougher, but it’s hard to tell because the wind is so violent right now,” he said. “That really affects how your cars drive here, but it’s full of challenges here at Kansas, that’s for sure. That’s a good thing.”
Not surprisingly, Keselowski is still unhappy with the penalties handed down by NASCAR earlier this week.
“I don’t think I’ve been surprised by much of anything in the last two or three days, but I think it’s really important to allow the appeal process to work its way out on its own,” he said. “That’s why it exists. I’m thankful that there is a process for appeals because, obviously, we’re in an ‘agree to disagree’ stage between Penske Racing and NASCAR.
“Thankfully, (there’s) a third panel or group to settle those disagreements.”
He admitted that preparing an appeal and the distractions that follow will be difficult to deal with.
“I think it’s definitely a challenge for us, which isn’t necessarily a bad thing. It’s an opportunity to continue to show how strong of a team Penske Racing can be, and I think there is a lot of passion inside this group. The strong will survive.”
And finally, Keselowski called on the media to press NASCAR for a clearer definition of what defines “cheating” in the Sprint Cup Series garage.
“I think it’s pretty obvious that defining cheating in this sport is something that’s been very poorly done,” he said. “And I think you all (in the media) are probably the ones that need to step back and try to figure out how to define that better, because clearly, this garage is having a hard time doing that.”
Posted by Dave Moody at 6:30 PM